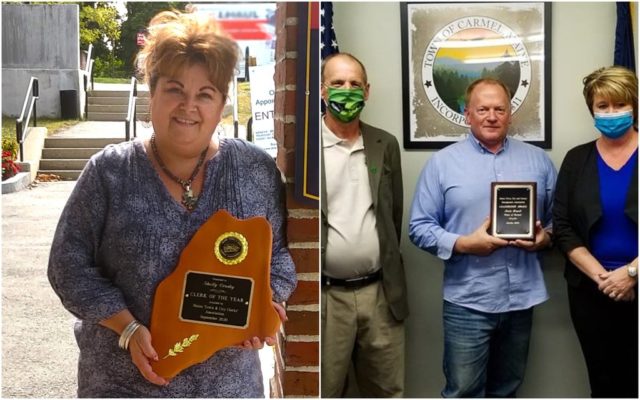 Nina Mahaleris • September 16, 2020
Two local officials from Orono and Carmel have been recognized by Maine’s municipal associations for contributions to their communities.  Carmel Town Manager Kevin Howell was named the recipient of this year’s leadership award from the Maine Town and City Management Association on Monday, Sept.

Two local officials from Orono and Carmel have been recognized by Maine’s municipal associations for contributions to their communities.

Carmel Town Manager Kevin Howell was named the recipient of this year’s leadership award from the Maine Town and City Management Association on Monday, Sept. 14.

Additionally, Orono Town Clerk Shelly Crosby was named Clerk of the Year by the Maine Town and City Clerks’ Association. The award was established in 1991 and is given to a municipal clerk for excellence in their contributions to their community and professionalism.

Yearly winners are nominated by their colleagues. The association called the award the “highest honor that is bestowed upon a municipal clerk by MTCCA.”

Crosby, who currently serves as the first vice president on the MTCCA’s executive committee, previously won the organization’s President Award in 2019.

“Our community is truly fortunate to have such a kind, committed, and competent Clerk at the helm of so many of our critical municipal functions,” the town of Orono posted via Facebook on Tuesday, recognizing Crosby.

Similarly, Howell was also nominated for the MTCMA’s Leadership award by his peers.

“This award is given out to recognize the Public Administrator for a particularly bold and innovative project or for solving an unusually difficult problem,” according to the association.

Bradley Town Manager Melissa Doane said that Howell’s involvement in building a new boat landing in Carmel was a “prime example” of his persistence and leadership. “This project not only benefits his community and residents but many outlying communities and countless Maine residents and visitors.”

The award is typically presented during the MTCMA’s annual meeting in August but will now be held via Zoom in October due to the coronavirus pandemic. The association’s executive committee still wanted to give Howell the award in person if possible, Doane said, who also serves on the committee.

On Monday, she and Union Town Manager Jay Feyler met with Howell to present the award in person. “I have had the privilege to work with Kevin on several regional projects and I have always been inspired by Kevin’s ‘out of the box’ thinking,” Doane said.