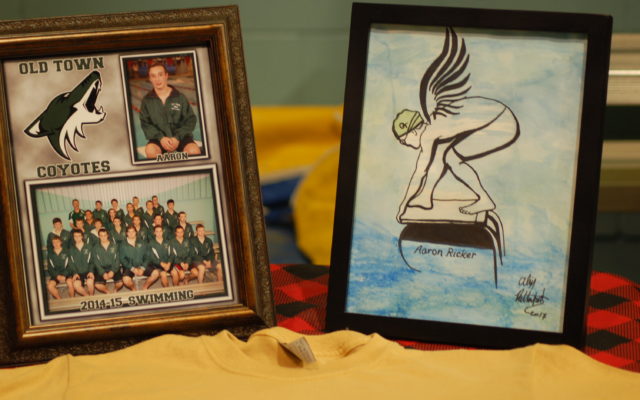 Nina Mahaleris • February 1, 2020
After a seven-year fight, Aaron succumbed to disease in January 2017, about six months before he would’ve graduated from Old Town High School. Every year since his death, the school has hosted a “Splash Out Cancer” meet in his memory.

OLD TOWN, Maine — Carlene Ricker sat on the bleacher, hands folded in her lap, watching swimmers dive into the pool as their teammates wrapped in towels cheered from the opposite end.

Perched on the table beside her was a photo of her late son, Aaron, in his sophomore year, posed in front of the pool and dressed in a dark green zip-up. Below was a photo of the swim team from that season. 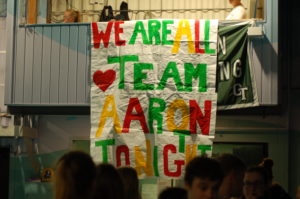 Every year, Old Town High School hosts a “Splash Out Cancer” swim meet to raise money for “Aaron’s Fund,” a scholarship created by the Ricker family that donates money to support the swim team. (Nina Mahaleris | The Penobscot Times)

It was a special year for Aaron — being in remission meant he could get in the water and compete —  his mother said. Unlike other years when the cancer held him back.

In 2010, an 11-year-old Aaron was diagnosed with Ewing’s Sarcoma — a rare bone cancer that yields an estimated 200 diagnoses in children and teens every year in the United States. About 1 percent of all childhood cancers are Ewing tumors, according to the American Cancer Society.

After a seven-year fight, Aaron succumbed to disease in January 2017, about six months before he would’ve graduated from Old Town High School. Every year since his death, the school has hosted a “Splash Out Cancer” meet in his memory.

This year, the event fell on the same day as the senior swim meet — just five days after the third anniversary of his passing.

“It’s bittersweet,” Ricker said, leaning over the table with photographs and other tributes to her late son as the scorekeeper rattled off standings over a loudspeaker. 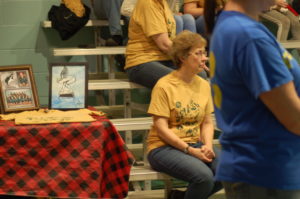 Carlene Ricker sits beside a portrait of her late son, Aaron, during Old Town High School’s Splash Out Cancer swim meet on Tuesday, Jan. 28. Aaron, a former swimmer for the school, died in 2017 after a long battle with a rare bone cancer, Ewing’s Sarcoma. (Nina Mahaleris | The Penobscot Times)

In 2017, Carlene and David Ricker decided to start “Aaron’s Fund,” to support the swim team and raise money for kids who wanted to swim but needed some financial help. They sold tickets raffling off custom made cornhole boards and baked whoopie pies for the student council to sell during the meet.

“It’s really important to our community,” said freshman Guinevere Tibbetts, a member of the council.

Tibbetts and her fellow councilmembers sold donated food from local businesses like Outta the Ordinary and Spotlight Cinemas. All the proceeds raised will go toward “Aaron’s Fund,” according to Tibbetts.

The swim team meant a lot to Aaron, his mother said. He would’ve loved the scholarship fund that was helping more students get into swimming — although he wouldn’t have been too fond of the cancer endowment they set up at the hospital, she added.

Throughout his fight with cancer, Aaron refused to identify with the disease, never referring to it as “my cancer” or “my tumor” — and he never gave up — Carlene said.

The “Splash Out Cancer” meet happens once a year, but people can donate to “Aaron’s Fund” at any time during the year through Old Town High School.