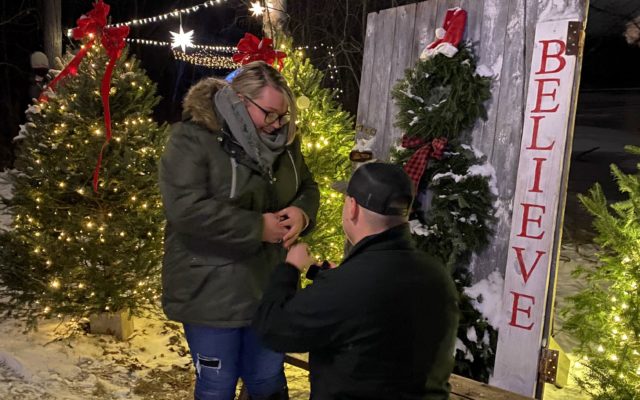 Couple gets engaged at Stillwater River Trail of Lights

Nina Mahaleris • December 21, 2020
ORONO, Maine — Emalee Lawrence had been bugging Justin Hatley, her boyfriend of nearly two years, about marriage for some time. “Let’s just get married, just for fun!” she often said to him.

ORONO, Maine — Emalee Lawrence had been bugging Justin Hatley, her boyfriend of nearly two years, about marriage for some time. “Let’s just get married, just for fun!” she often said to him.

But the right moment hadn’t come along yet. Until they arrived in Maine for a family visit last week.

The North Carolina couple spent a week in Old Town with Hatley’s brother, when Hatley found the right spot to pop the question — the Stillwater River Trail. “I had been thinking about it for a month,” Hatley said. “We were up there on vacation and it just seemed like the right time.”

On the evening of Dec. 18 — while Lawrence napped — Hatley and his older brother, Josh, planned the proposal. More than 500 feet of the river trail that stretches from Orono to Old Town had been strung with a medley of lights just in time for the holiday season.

Beyond a short tunnel wrapped in yellow lights, the brothers stopped at Brownies Park — a small field that overlooks the Stillwater River. Sheets of ice covering the river cracked loudly as they figured out the logistics.

“All the pieces just fell in line,” Hatley, an equipment sales representative from Albemarle, said.

Back in Old Town, Lawrence got a call from her boyfriend, telling her to get out of bed and get dressed for family pictures. He had been acting nervous and excited for most of the day

Lawrence sensed he was nervous and excited but couldn’t figure out why. Still, she got ready and joined them at the river trail. They walked together underneath the lights, Christmas music playing in the background, before arriving at the spot.

Hatley waited as trail-goers passed by, until it was just the two of them and some family left. Then they pulled off their masks for a brief moment.

“You’re acting so nervous, what’s up?” Lawrence said to him. “I’ve got something I gotta ask you,” Hatley replied, before getting down on one knee and pulling out a ring.

“I was so shocked and so happy,” Lawrence, who is a daycare teacher, said. “I knew when we got together that I would spend forever with him.”

It was just the way she had pictured it, too. I’m a simple girl, she said. Lawrence wanted the proposal to be a surprise, on just an ordinary day. “I’ll always remember the simplicity of it.”

Lawrence said she assumed he wasn’t going to propose during the pandemic but that took her by surprise, too. “It was just simply the best thing that’s happened this year,” she said.

The couple plans to wed next fall.

The Stillwater River Trail of Lights is a free event hosted from 4 to 10 p.m. every day through Jan. 1. Visitors are required to wear masks.