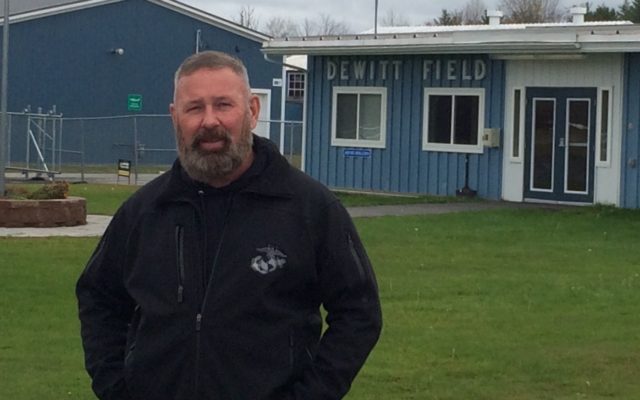 Mike Dowd • December 3, 2019
Old Town Municipal Airport and Seaplane Base -- DeWitt Field -- has been a hub of development activity recently. The 360-acre site includes two runways that were reconstructed in 2015-16; ten buildings, with three more in various stages of construction; a recently renovated terminal; a new beacon; and a commercial area along the access road featuring two businesses and another getting ready to move in.

OLD TOWN — Lance Farrar tells the story of meeting folks out and about who ask him what he does for work.

“I tell them I’m the airport director and a lot of them say, ‘I didn’t know Old Town had an airport,”’ Farrar said, shaking his head as he walked from his office in the one-story terminal toward a hangar under construction on a recent gray and drizzly morning.

The fact Old Town Municipal Airport and Seaplane Base — DeWitt Field — is located a couple of miles from downtown along the Stillwater River might explain why some people are unaware of it, but it has been a hub of development activity recently, coinciding with Farrar’s five-year tenure running the city-owned facility.

The 360-acre site includes two runways that were reconstructed in 2015-16; ten buildings, with three more in various stages of construction; the recently renovated terminal; a new beacon; and a commercial area along the access road featuring two businesses and another getting ready to move in.

“We’ve invested $8-$9 million in the airport in the last five years,” Farrar said. “This place did not look like this five years ago.”

The airport didn’t look like much back to the 1940s when it was built as an emergency landing strip for the government and Civilian Pilot Training Program during World War II, according to a Bangor Daily News article on its history written by Clifton V. Bemis in 1992. In 1944 Kenneth DeWitt formed Central Maine Flying Services Inc., basing operations at the field and, later, providing its namesake. DeWitt oversaw the initial growth of the facility, which peaked in the 1950s and then stagnated for several decades.

Farrar is quick to credit the recent expansion to assistance from an airport consultant, city officials, and Maine’s Congressional delegation, which helped secure federal grant money to fund most of the construction and renovation. The city’s share is around 5 percent of the cost, Farrar said.

A six-bay hangar currently being built is a prime example of how the airport expands. The structure, which is being marketed to owners of seaplanes, costs around $985,000, according to Old Town City Manager Bill Mayo. Federal Aviation Administration grants, and 5 percent Maine Department of Transportation funding, cover 95 percent of the cost.

“The City is getting this done for just under $50,000,” Mayo said. “That money comes from the hangar reserve fund which is funded by hangar lease payments and not tax dollars.”

The airport’s budget is $305,000 this year, including the salaries of Farrar ($55,000) and those of two part-time employees. The 36 to 38 aircraft that call the field home — hangar space for a plane costs each owner $250 per month — plus the presence of a Maine Forest Service base and, coming soon, a Customs and Border Protection base, provide revenue, but not enough to put the airport in the black.

“We’re getting a lot closer to breaking even,” said Mayo, who sits on the 7-member airport advisory committee made up of city residents and officials. “We’re adding an 8,000-gallon jet fuel tank that will service turbine-engine craft, which will bring in another $20,000 [a year] in revenue.”

Although there’s been no economic impact study done, Old Town Economic Development Director E.J. Roach said the city is smart to invest in the facility.

“The recent development out at the airport helps to bring jobs and tax revenue to the city and alleviates any lingering concerns regarding the original decision to invest a significant amount of city funds to develop the infrastructure at the Airport Business Park,” Roach wrote in an email. “Our hope is that increased activity will set the stage for future development at the remaining lots at the Airport Business Park.”

Mayo and Farrar see the facility as a key element of the city’s economic health and its future.

“It’s a big development area for us,” Mayo said. “There are [commercial] lots to be sold there. We’re trying to retain businesses in town and get new businesses to come in. There’s a limited amount of land available in Old Town, so the [airport] land is important.”

Farrar, who grew up in Old Town and Orono, learned about aircraft maintenance and airports during his 32-year military career in the Marines and Army. He said aside from commercial development, there’s plenty of land, and water, to devote to improving the airport, which averages 40-60 flights a day between general aviation and government aircraft.
“I have a vision of where I want it to be, including developing the waterfront for [more] seaplanes,” Farrar said. “It’s come a long way but there’s still more to be done.”