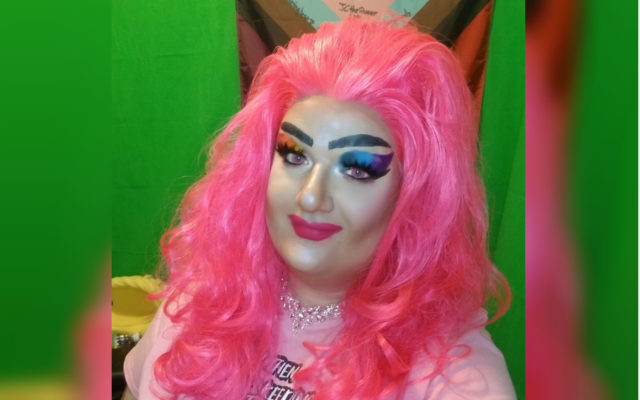 Nina Mahaleris • July 8, 2020
It began with one negative Facebook comment. Now a local drag queen is on a mission to change the conversation -- starting with his own community.

ORONO, Maine — It began with one negative Facebook comment. Now a local drag queen is on a mission to change the conversation — starting with his own community.

When a story about Orono activists celebrating Pride month solicited a negative comment via Facebook, Robert Jackson — a local drag performer — decided to use the experience as a launching pad for positive change.

“Leave the giraffe alone … the giraffe has nothing to do with your LGBTQ+ community. Leave all animals out of your agenda … they don’t deserve your treatment,” one commenter named Susan left below a NewsCenter Maine story posted via Facebook in mid-June. 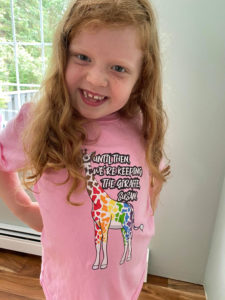 6-year-old Castine Carter-Kunz poses for a photo in a shirt inspired by a negative Facebook comment. (Courtesy of Robert Jackson)

Jackson, also known by his drag persona, Carrie the One, said he usually brushes off pessimistic comments but this time, he couldn’t resist the urge to respond.

“You can have it back when our trans friends stop getting murdered, I can donate blood without any strings attached, and kids stop taking their own lives because s—– people like you can’t handle the amazing, queer people they’re becoming.

“Until then, we’re keeping the giraffe, Susan,” he concluded.

Jackson posted about interaction on his own page and soon, began having conversations with friends about how to create a positive outcome of the experience.

With help from a digital artist friend, Jackson launched a collection of merchandise — completely inspired by the negative comment.

“While we have made great strides in the push for equality, there are still many who can’t see us for the perfectly diverse, beautifully queer people we are. So we decided to do something about it,” he wrote on his drag persona’s website.

So far, Jackson has raised more than $1,000 which he intends to split between the Maine Trans Net, and establishing a fund in Orono for diversity education and social justice programs, he said.

“[I] posted it thinking we would get a few people … but it has really taken off.”

The Maine Trans Net was established in 2005 to provide support services for transgender people and their allies — such as connecting LGBTQ people with health providers and covering costs for legal name changes. The organization also offers support groups and helps facilitate public dialogues about LGBTQ progress. 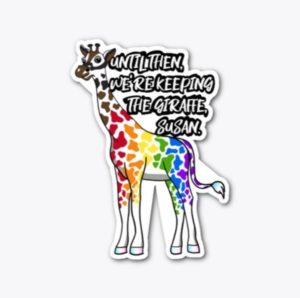 Rob Jackson, as known as Orono drag queen Carrie the One, revealed a collection of merchandise inspired by a negative Facebook comment last month. Proceeds from the merchandise, such as stickers, teeshirts and totebags, will be split between the Maine Trans Net and a fund to support social justice and diversity education in Orono, he said. (Nina Mahaleris | The Penobscot Times)

That mission is deeply rooted in Jackson.

When not in drag, he daylights as the staff associate for diversity and inclusion at the University of Maine, where he leads programs on acceptance, and helps support LGBTQ and students of color.

And he’s grown accustomed to public backlash from supporting the LGBTQ community.

At work, he still receives the occasional email from people asking why taxpayer dollars are being used to pay for LGBTQ services like helping students change the name on their identification cards to reflect their correct identities.

He tends to notice a swell in negative comments around Pride month, as public support for the LGBTQ community becomes a contentious issue.

Part of the struggle lies in educating people who aren’t familiar with LGBTQ issues, too. Often, people can be quick to say that displays of support — like the animal sculptures in Orono — are just political propaganda, Jackson explained.

But the tides are beginning to change. “We’re learning that folks are more interested in supporting these causes than we realized here in Orono,” he said, adding that surrounding towns have also reached out about how they can better support marginalized people in their communities.

For now, Jackson and his team of local allies is focusing on creating local change, but may extend their educational efforts statewide in the future.

“I don’t have any intention of stopping this any time soon,” he said.