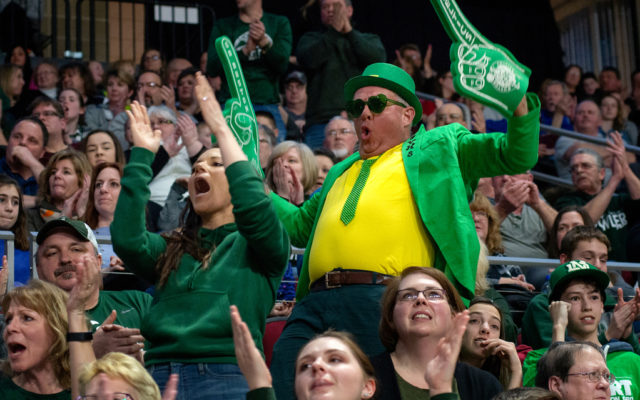 Ernie Clark, BDN Staff • February 14, 2020
Some better news is that many of the quarterfinal sessions around the state have been expanded from two games to four games.

The bad news for some high school basketball fans is that adult, single-session tickets for this year’s tournament have increased from $8 to $10. Tickets remain $5 each for seniors and students.

Some better news is that many of the quarterfinal sessions around the state have been expanded from two games to four games.

A similar schedule will be tested at the Cross Insurance Center in Bangor for Friday’s opening day of Class B North quarterfinals.

The Friday slate in Bangor has been expanded from three games to four games in a single session beginning at 3:30 p.m. with a girls quarterfinal between No. 3 Presque Isle and No. 6 Winslow.

The second girls quarterfinal of the session between No. 2 Waterville and No. 7 Ellsworth is set for 5 p.m., followed by a half-hour break to help ensure that the games stay on schedule before the same session resumes with two Class B North boys quarterfinals beginning at 7 p.m.

A single ticket will allow a fan to see all four of those games.

The remainder of the North quarterfinals in Classes B, C and D in Bangor will be played as traditional two-game sessions this year. MPA executive director Mike Burnham said Friday’s four-game set will be used as a test to determine whether the Cross Insurance Center can hold the predictably large crowds that attend the early stages of postseason play with as many as eight schools represented during a four-game session.

Saturday’s schedule in Bangor has three, two-game sessions this year instead of the seven-game day of past years, with the remainder of the Class B North quarterfinals followed by two Class D North girls quarterfinals in the evening.

Tournament fans at the Cross Insurance Center also will be subject to security screening, including a metal detector, for the first time.

In southern Maine, the Class A South and Class B South semifinals are being moved from the Cross Insurance Arena in Portland to the Portland Expo. It is partly a cost-cutting measure and also because coaches believe the smaller Expo provides a better tournament atmosphere for early round games.

This year both the Class A South and Class B South quarterfinals and semifinals will be played at the Expo, which has a capacity for basketball of approximately 2,500 compared with 6,000 at the Cross Insurance Arena.

The regional finals in both classes, along with the Class AA North and South semifinals and championship games, will remain at the Cross Insurance Arena.

This year’s state championship-game rotation will begin with the Class B finals on Friday, Feb. 28, at the Cross Insurance Center in Bangor.

The remainder of the state finals will be played Saturday, Feb. 29, with Classes A and AA at the Cross Insurance Arena in Portland and Classes D and C at the Augusta Civic Center.

And in one more noteworthy change coming to Tourney 2020, the basketball rims used at the Augusta Civic Center have been replaced for the first time since that facility was opened in 1973.