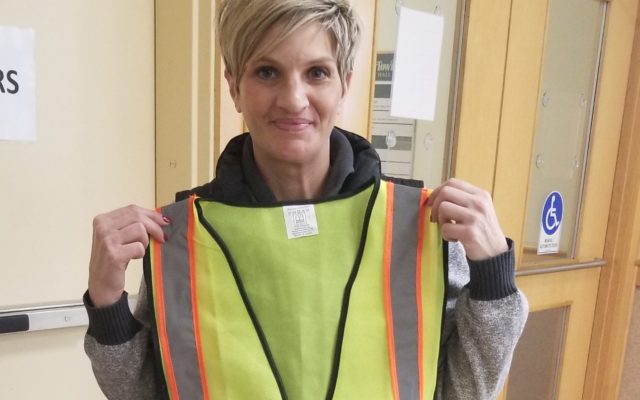 OLD TOWN — The City of Old Town launched its new pedestrian initiative “Walk Safe Old Town” Nov. 15 aimed to increase the visibility of people walking or running near roadways in the dark.

“The bottom line is it’s going to let people enjoy the outdoors in the safest way they can,” said Travis Roy, assistant city manager. “This just seems like the right thing to do at the right time.”

Within hours of the initiative being announced on the Old Town Police Department’s Facebook page, about 20 people came to City Hall to pick up a vest on Nov. 15 with an estimated 35 more by the following Monday, requiring the city to order a second batch of vests, according to Roy. As of Friday, Nov. 22, 120 vests had been picked up with a third batch of 80 vests ordered.

“We’re quite thrilled that the first batch is gone and we’re on our second batch,” said Roy. “[It shows] people agreed with us. It was a good thing to do.”

Similar to the ones worn by Old Town Public Works employees, the vests are bright neon yellow with gray reflectors and orange stripes along the back. Roy suggests residents pick up a vest in a larger size so they can be worn over their coats in the winter.

Although it would not save every pedestrian, Roy said that if they can get people to wear the vest when they are near the road, it would help increase safety. He also suggests that residents keep the vests clean as it would help their effectiveness.

According to a study by the Governors Highway Association, an estimated 6,227 pedestrians died the first six months of 2018 including three in Maine. Last January, a University of Maine student was killed after being hit by a plow at the intersection of Bennoch Road and Stillwater Avenue.

“We ask that when using these vests, you are still very aware of your surroundings, while the vests will dramatically increase your visibility, one must be mindful of your proximity to traffic,” the Old Town Police Department wrote in a press release.

Roy hopes that the success of the vests will encourage other areas to participate in similar projects.

“We’d love to have other communities jump on board and do the same,” he said.

Old Town residents can pick up a reflective vest at Old Town City Hall 7 a.m.- 5 p.m. Monday-Friday. The vests are available on a first come, first serve basis and are available in most adult sizes.