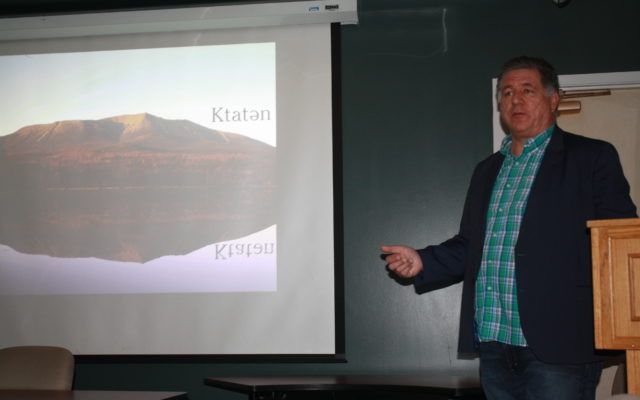 Contributed News • November 4, 2019
Francis is now the director of cultural and historic preservation for the Penobscot Nation and an accomplished photographer, painter, graphic artist and filmmaker. He was one of many Wabanaki cultural historians and community members who shared their stories and traditions during the city of Presque Isle’s first Native American Heritage Month celebration.

PRESQUE ISLE, Maine — When James Francis was 10 years old and living on Indian Island, the reservation of the Penobscot Nation near Old Town, he visited the home of an elder he had not spoken to before. He wanted to know why she had spray painted the words “Wounded Knee” on a piece of plywood that hung on her door.

The elder told Francis about the Wounded Knee Massacre, during which nearly 300 Lakota individuals were killed after fleeing a South Dakota reservation in 1890. Francis later began visiting her regularly to hear stories of Native history and culture, including that of his own people on Indian Island.

“She gave me a strong sense of community and place,” Francis said, during a Nov. 2 presentation at the University of Maine at Presque Isle titled “Penobscot Sense of Place.”

Francis is now the director of cultural and historic preservation for the Penobscot Nation and an accomplished photographer, painter, graphic artist and filmmaker. He was one of many Wabanaki cultural historians and community members who shared their stories and traditions during the city of Presque Isle’s first Native American Heritage Month celebration.

More than 300 people attended events that were held throughout the weekend at the Aroostook Band of Micmacs museum, UMPI, Northern Maine Community College, the public library and Wintergreen Arts Center.

The community ties that Francis formed as a child fueled his passion for studying Maine Native history while he was a history student at the University of Maine. He became fascinated by stories of writer Henry David Thoreau visiting Penobscot land and learned how Thoreau documented “Indian place names” in journals that were separate from his famous book “The Maine Woods.”

One of Thoreau’s visits occurred in 1857, during which he hired a Penobscot guide named Joe Pollis, who taught him the names that the tribe used for rivers, streams, mountains and animals in nature. Thoreau wrote, “It was a new light when my guide gave me Indian names for things that for which I only had scientific names … as I understood the language, I saw them from a new point of view.”

Francis explained that if people look at Indian place names through the Penobscot perspective as opposed to the points of view of Western culture, like Thoreau, they could learn the true meaning of the names.

He used the word “Katahdin” as one of many examples. In Penobscot language, the word is spelled “Ktaten.” Though many non-Native Mainers assume that the word means “greatest mountain” due to Katahdin being the tallest mountain in the state, Francis said that myth is not true.

“The political divisions among state lines did not exist for the early days of Native Americans in Maine. Mount Washington in New Hampshire would have been the tallest mountain nearest to them,” Francis said. “The Penobscot name means “sacred mountain.” It has nothing to do with greatness, but with the way people interpret the name based on their cultural viewpoint.”

Francis’ presentation was one of many throughout the weekend that showcased Maine’s Native heritage, in particular that of the local Micmac culture. Local artists Donna Sanipass, Jennifer Pictou and Sipsis, Waupi and Nick Paul gave demonstrations of basket weaving, bead work and dances, respectively.

Many community members also came out to hear John Dennis, Micmac cultural director, share traditional creation legends that demonstrate the close connections between Micmac culture and nature. One such story involves a Micmac warrior fighting an “ice giant” that symbolizes the Ice Age, which froze the ground and animals and made hunting impossible.

Though the arrows shot into the ice giant made no impact, the creature slowly melted as he got closer to the warrior’s fire. After they fight, the warrior said, “I will not kill you as long as you let me know when you come and I’ll leave.” The story symbolizes the patterns of ice ages, which involve colder global temperatures and the expansion of glaciers.

“Our stories always explain why certain things have happened in nature and are used to teach and guide children,” Dennis said.