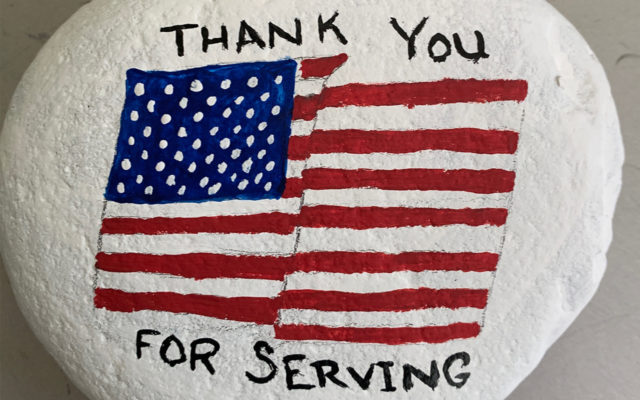 Nina Mahaleris • May 22, 2020
In lieu of a traditional Memorial Day celebration, the local Cub Scout Troop 76 -- with support from the City of Old Town -- is encouraging people to take part in a new project to commemorate veterans.

OLD TOWN, Maine — In lieu of a traditional Memorial Day celebration, the local Cub Scout Troop 76 — with support from the City of Old Town — is encouraging people to take part in a new project to commemorate veterans.

“For Memorial Day this year, we are going to be painting rocks at home to say thank you to our falling vets and those who still serve,” the troop posted on their Facebook page May 15.

Troop 76 Cubmaster Alisha O’Meara said she was looking for ways to keep her 60 Cub Scouts involved in the community as the COVID-19 pandemic halted their usual activities. Her husband offered the idea of rock painting.

“I’m excited that it’s taking off and the Cub Scouts can still participate … We’re just trying to keep the Cub Scouts involved,” O’Meara said, adding that it’s been roughly two and a half months since everyone was able to get together for their usual meetings.

People can paint designs as a thank-you to essential workers on the frontlines of the coronavirus pandemic, she said.

The City of Old Town, which has supported the project and agreed to display the rocks in the Riverside Park along Main Street, advised people to choose a rock between six and eight inches.

“There is a reason for our request to use a pretty big rock. Primarily, it is because we are asking that you place the final masterpieces along the edge of the grass, not on the sidewalk, and we want people to be able to see them. This will help people to see the rocks and hopefully avoid someone tripping over them,” the City posted on Facebook.

People can pick out rocks from a free pile at the Old Town Canoe Factory site on Middle Street.

Once finished and dry, the rocks can be placed on the edge of the grass by Riverfront Park, across from the Penobscot County Federal Credit Union, according to the city.

Those who want to keep their rocks after the display is over should pick them up by June 14.

O’Meara herself has already painted two rocks for the display. So far, community response has been positive, she said, noting one Facebook post about the activity from the city of Old Town has garnered nearly 80 shares in the last few days.

The project is also open to people in communities outside of Old Town, O’Meara said. The Cub Scout troop covers Milford, Bradley, Alton and Greenbush, along with Old Town, and people in those areas can paint rocks to display at the Alton Town Store or in Milford by the Penobscot River.

Similarly, the Old Town Boy Scout Troop 76 recently set out flags on the graves of fallen veterans at Lawndale Cemetery to celebrate the holiday, too.

“This is a fun way to let our community know that we are still here and that we care,” the Cub Scout troop wrote on Facebook.