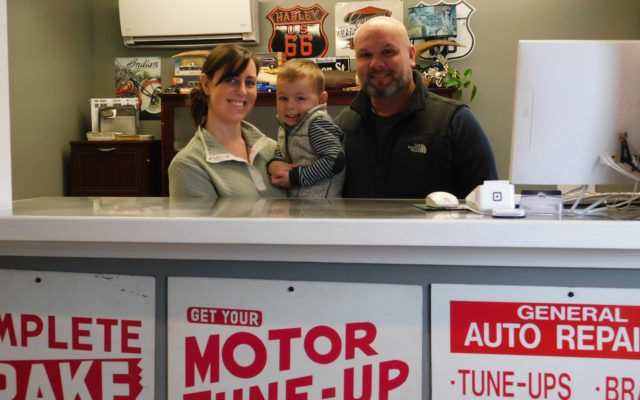 Nina Mahaleris • January 13, 2020
Still reeling from the sudden death of his adult son and seeking a safer place to raise their 3-year-old, Tony Luna and his wife Kristin packed up their home in Tyngsboro, Massachusetts, and established a new life in Old Town.

OLD TOWN, Maine — Still reeling from the sudden death of his adult son and seeking a safer place to raise their 3-year-old, Tony Luna and his wife Kristin packed up their home in Tyngsboro, Massachusetts, and established a new life in Old Town.

Tony Luna, originally from Lowell, saw an opportunity to start fresh in Maine after losing his son, Anthony, to gun violence.

“That was the big push to move here,” he said.

Three months later, the family bought Kristin’s parents’ house and settled into a new kind of normal — fixing up used cars and reselling them right out of their own driveway.

Now — about two years later — the Lunas are on the cusp of celebrating their first month of business on Stillwater Avenue, which Tony describes as a dream come true.

“This was my dream for a long time,” he said.

For many years, Luna worked in dealerships, learning the ins and outs of the auto sales industry.

Growing up, he watched his father work on cars at home, which sparked his own interest in the business. Before the family opened their service shop in Old Town, Luna had a side job fixing up cars and selling them from home.

Now, with their newly opened business in Old Town, the Lunas are working to establish their name in the community and form a good relationship with their customers.

Maintaining a good reputation in the community is more important to them than making money, Luna explained, which is why they’ve tailored the business to better serve their customers. The Lunas offer one-year warranty on all their cars, without any extra fees.

They also can service cars right in the shop and offer a $40 per hour labor rate for customers who purchase vehicles from them. Their regular rate is $80 an hour, which Luna said is comparatively lower than other shops in the area.

As most of their cars come from auctions or are otherwise sold to them, the Lunas have to make sure their vehicles are safe before reselling them. While they will send cars out to mechanics for big repairs, Luna still likes to get under the cars himself for an initial check and fix what he can.

Kristin also has a hand in the business and helped to get the shop up and running for their December opening. When she isn’t at home caring for their son Kaiden, she is in the shop with her husband, helping to organize their finances.

Kaiden will be a familiar face in the shop, too, it seems. At 3 years old, he has already developed a passion for cars like his dad, and may follow in his footsteps someday.

It’s not uncommon for him to ask people what cars they drive and if they need a new one, his parents said. When Kristin’s sister came to visit the shop, Kaiden tried to sell her his toy cars.