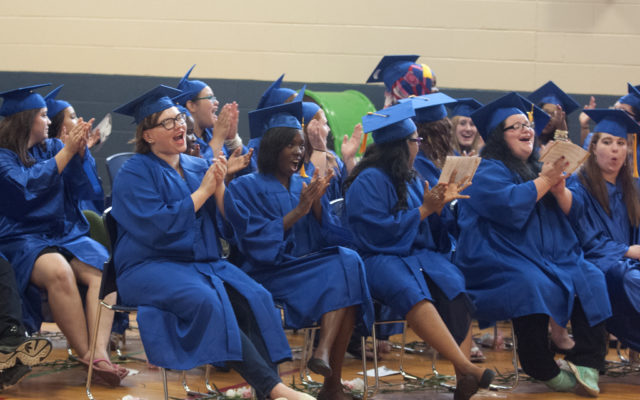 Maine high schoolers can graduate in person this spring

Eesha Pendharkar • May 6, 2020
This spring’s crop of high school seniors can graduate in person, but a range of coronavirus-related restrictions means their ceremonies will look different from all others.

This spring’s crop of high school seniors can graduate in person, but a range of coronavirus-related restrictions means their ceremonies will look different from all others.

The ceremonies will be limited to 50 people with everyone — graduates and family members — seated at least 6 feet apart and wearing face coverings. Graduates might collect their diplomas from a table, rather than directly from the hands of the school principal or school board chair. They’ll stand at least 6 feet apart from each other for any photo.

For all but Maine’s small high schools, the restrictions could mean multiple ceremonies of 50 people each. Drive-in ceremonies are also an option.

The Maine Department of Education on Wednesday said that in-person ceremonies are still allowed this spring, and it outlined the requirements those ceremonies would have to follow to comply with the state’s current restrictions aimed at preventing the spread of the coronavirus. Whether to hold in-person ceremonies is up to individual school districts.

The Bangor area this spring will see a mix of socially distanced in-person and automobile celebrations.

Brewer’s graduation ceremony on June 7 will take place in the high school cafeteria, with seniors walking across a stage to collect their diplomas and have their pictures taken. The school department then plans to string together a video of all seniors collecting their diplomas to be livestreamed a week later.

Brewer, which has 160 seniors, is consulting with local police to plan a procession of high school graduates in their cars following the video livestream to allow faculty, staff and community members to honor the class of 2020.

“No pandemic can overshadow the pride and love we feel for our seniors,” said Brewer High School Principal Brent Slowikowski.

In Hermon, which is graduating 120 students, the school department is also planning a socially distant, in-person graduation.

Two students and up to eight family members per student can be present at a time in the Hermon High School auditorium. The entire ceremony will last a full day, Superintendent Gary Gonyar said, as groups of students and their family members leave and others come in.

“We wanted to do whatever we could to help kids capture the moment,” he said. “We’re trying to honor the kids, but also we’re definitely going to follow the rules of the governor and the CDC, and recommendations made by the commissioner.”

During Bangor High School’s June 14 ceremony, graduates will be in cars with their families, and will drive up to receive their diploma, according to an email Principal Paul Butler sent to families. Graduates have to be in the passenger seats.

A stage will be set up outside the administration entrance of Bangor High School, and graduates can drive up when their names are announced, get out of the car, collect their diplomas and pose for individual photos. The event will also be livestreamed and students’ speeches and awards will be broadcast over live radio.

Other high schools, including Lewiston High School and Hampden Academy will finalize their graduation ceremony plans this week or next week, according to district administrators.

The 50-person limit might not pose as much of a hurdle for East Grand Community School in Danforth as it would for most other Maine high schools. The school has just four seniors in its graduating class.

Peggy White, principal at East Grand School, said Wednesday that no decision had been made.

“We are planning for a ceremony and should have final details mid-May,” she said.

Schools considering drive-in ceremonies would have to make arrangements that allow students whose families don’t have vehicles to participate.

The Department of Education said that parking spots would need to be spaced a minimum of 6 feet apart; all participants will be required to stay inside their vehicles with the doors closed. Participants would have to wear face coverings if their windows are down, and only one student at a time would be allowed to leave the family’s vehicle to pick up a diploma.

Schools can also opt for virtual ceremonies, or compile video tributes to graduating seniors. They can also consider postponing graduation ceremonies altogether until it is safe for larger groups to gather.

Joe Cyr of the Houlton Pioneer Times contributed to this report.