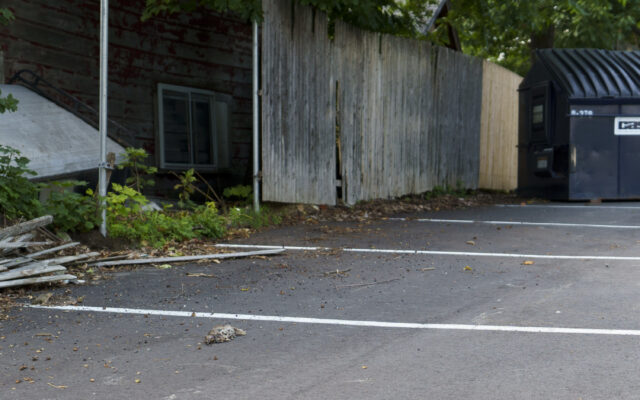 Milford’s war on rats at a stalemate

For weeks now, residents have been complaining on social media and directly to the town about an increase in rats.

A local Facebook page is regularly filled with rat-related posts, from residents encouraging different strategies to fight back against the prolific creatures to photos of dead rats, lined up next to each other that bear striking resemblances to war zone photos of dead enemy combatants.

During the town’s Tuesday night Selectboard meeting, board member Doug Libby said he’s heard from several residents there’s an issue with the number of rats slinking around neighborhoods of Milford’s village area.

One resident shouted from the audience that he killed 38 in the past week alone. 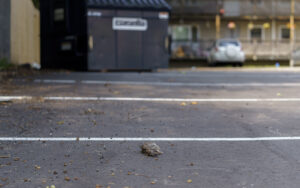 A dead rat festers in a parking lot in Milford July 22, 2021. (Sawyer Loftus | The Penobscot Times)

While no official tally has been taken by the town yet, the number of rats dead is well more than 100 based on the social media posts and public comment at the Selectboard meeting.

Despite a public discussion at the meeting about the problem, there’s little individual residents can do to solve the problem.

Griffin Dill, an integrated pest management professional at the University of Maine, said if communities as a whole don’t work together and commit to maintaining clean spaces, the rats will always be there.

“It really does come down to a neighborhood or community-wide effort to ensure that [rats] don’t become a problem, and if they do become a problem it has to be dealt with on a larger scale than just an individual homeowner,” he said. “If there’s one person who is not keeping up their end of the bargain, the problem is going to be an immense challenge.”

The town’s rat problem is largely confined to a small area within the village district that stretches from Ferry Street to the intersection of Main and County roads, according to Milford Fire Chief Josh Mailman.

The town office has only received three formal complaints, two of which were specific to Penobscot Street and the other for Main Road, town administrative assistant Sarah Commeau said at the meeting Tuesday.

It’s easy to find a property and vilify it as being the epicenter of rat activity, but the reality is rats are incredibly linked to human behavior, Dill said.

So, if trash is left out, lawns kept unmowed, birdseed left out and even debris left in yards, rats can and likely will thrive, he said.

The village area is one of the most densely populated in Milford and includes several apartment buildings that also boast large dumpsters where several households leave their trash.

Again, Dill emphasized, it’s not the apartment complex’s fault rats are attracted to the dumpsters, but it’s a food source. 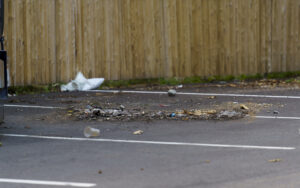 A pile of garbage sits in a parking lot in Milford July 22, 2021. Garbage like this is prime rat attractant, according to experts. (Sawyer Loftus | The Penobscot Times).

Driving around the area where most of the rat problems have been officially reported to the town, conditions that favor rat development are visible, but another key factor is climate change.

“I think there’s a legitimate cause for concern — we’re not in the worst area,” he said. “But, if we continue to see warmer and mild, short winters, then it’s only going to exacerbate the issue.”

These warmer winters have been a more recent development in Maine and one that seems to have an impact on rat populations, Dill said.

“Rats generally have somewhere around four to six litters of young per year, and that really slows down throughout the winter,” Dill said. “In mild winters, they continue breeding throughout and we can see these kinds of explosions of rats, based on that increased breeding availability.”

“I can take one guy and just put him on rodent work and keep him busy for a week out of a whole month,” Stoops said. “I had a guy [one day] doing rodent work in the Old Town-Orono area and he put in a seven-hour day and that’s all he did — rat and mouse jobs.”

Nationally there’s been a steady increase, largely in big metropolitan areas, in rat populations for a number of years, but within the last three years things have intensified, Dill said.

And while it may be alarming to residents across Milford and Maine, the situation in the state is not as severe with so far only anecdotal evidence of increases around the Portland area, he said.

While it remains a frustrating and disturbing issue for residents of Milford, town officials insisted they won’t take action, nor can they.

Maine law restricts how municipalities can spend taxpayer money, largely barring spending on projects on private property. Plus there’s no clear legal process to punish or even initiate action against residents who may be spurring on the issue, town health officer Chris Liepold said during the meeting Tuesday.

So, while the rats continue to multiply, residents should take a look at their yards and make sure trash is picked up and stored securely, chicken coops are cleaned regularly and any potential habitats like rundown sheds or houses are dealt with, town officials warned residents.