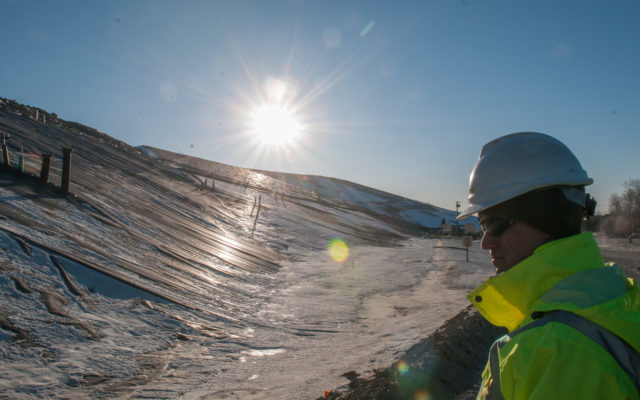 Charles Eichacker, BDN Staff • February 7, 2020
The total annual tonnage of waste delivered to Juniper Ridge has been steadily rising over the last half-dozen years, from 606,254 tons in 2013 to 735,942 in 2018, according to the most recent data collected by the state.

The amount of waste that goes to the Juniper Ridge Landfill in Old Town has been climbing upward for the last six years — a trend that continued this past year partly as a result of new state restrictions on the use of wastewater sludge as a fertilizer.

The upward trend has also coincided with a controversial years-long effort by the company that runs the state-owned landfill, Casella Waste Systems, to expand its capacity. That effort culminated in 2017, when state and local regulators finally approved the proposal to add an additional 9.35 million cubic yards of storage space to the landfill. In total, the expansion would nearly double the landfill’s capacity.

Casella constructed the first part of its expansion late in 2018, and it expects to break ground on a second phase later this year and continue to add extra space as it’s needed, according to Don Meagher, Casella’s manager of planning and development.

The total annual tonnage of waste delivered to Juniper Ridge has been steadily rising over the last half-dozen years, from 606,254 tons in 2013 to 735,942 in 2018, according to the most recent data collected by the state. The total tonnage was also up last year, but Casella will not know by how much until it completes its annual report this spring, according to Meagher.

The Maine Department of Environmental Protection has previously projected the expansion will extend the landfill’s life by eight to 10 years.

Casella has cited two drivers of last year’s increase in deliveries to the Old Town landfill. One of them is an improved economy that’s generally associated with more construction and purchasing, according to Meagher. The total amount of debris from construction and demolition sent to Juniper Ridge steadily climbed between 2015 and 2018 and generally accounted for at least half of the total delivered tonnage in those years, according to data Casella has reported to the state.

The other reason that Casella has cited for last year’s bump was the state’s crackdown on the use of sludge from wastewater treatment plants as a fertilizer for farm fields. Officials are concerned that some of the sludge could be contaminated by synthetic chemicals used in non-stick cookware, fire suppression and other products. Because of the restrictions, that sludge is now being taken to landfills instead.

In paperwork filed with the state, Casella said that the expanded section of Juniper Ridge is “experiencing far greater volumes of wastewater treatment plant sludges disposed in the facility than in the past and these volumes are not projected to abate any time.” In addition, Casella expects more deliveries of sludge from the pulp mill in Old Town that reopened last year.

In 2018, the landfill received 53,023 tons of municipal and industrial wastewater sludge, accounting for about 7 percent of its total delivered waste that year, according to state data. The total amount delivered in 2019 was not available.

As a result of those two developments, Casella has requested that the Maine Department of Environmental Protection modify the license for the Juniper Ridge expansion so that it can receive more deliveries each year of waste classified as “oversized bulky waste,” which can include couches, mattresses, tarps and other cumbersome objects.

The state has approved that request just for 2020, allowing the company to take in 20,000 additional tons of the oversized waste this year. But the status of the approval is uncertain, as Old Town resident Edward Spencer appealed it to the Maine Board of Environmental Protection in January.

Meagher declined to comment on the appeal this week. But in paperwork, Casella has said it needs the ability to take in more bulky waste to help stabilize the increased loads of sludge.

It has also cited the fact that a Lewiston plant that sends its bulky waste to Juniper Ridge last year projected an increase in the amount it would pass along. The plant, ReEnergy Lewiston, recycles construction and demolition debris — the majority of which comes from outside the state — but it generally needs to landfill about 25 to 30 percent of the waste because it can’t be recycled, according to Gregory Leahey, president and chief operating officer of its parent company.

In his appeal, Spencer argued that the increased disposal of bulky waste at Juniper Ridge will contribute to a number of problems affecting him and his wife Cheryl — who live near the landfill — including more bad smells, the destabilization of the toxins contained in the landfill and the increased risk of an invasive species such as the emerald ash borer “hitching a ride on a load of debris from beyond Maine’s borders.”