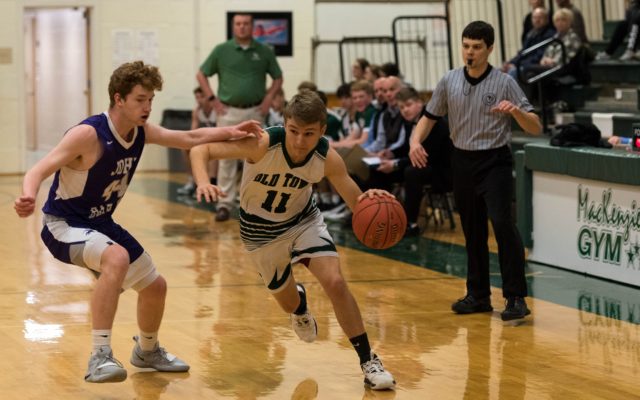 Nina Mahaleris • January 10, 2020
The Coyotes took home four victories over the Crusaders this week, with wins by both varsity and junior varsity teams.

OLD TOWN, Maine — The Coyotes took home four victories over the Crusaders this week, with wins by both varsity and junior varsity teams.

Afterward, the varsity boys pulled off a close win, finishing out the game just a few points ahead of John Bapst, 52-48 at the end. Old Town player Michael Brown scored a total of 13 points for the Coyotes, followed up by another 12 points from Shawn Hoogterp.

Ethan Hayes scored 11 more points along with Matt Seymour, Bryce Richards, Sam Magooon and Kyle Paradis who collectively scored another 14 points. The Coyotes secured a final two points, setting them up for a 4-point lead over the Crusaders. 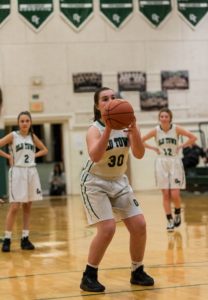 An Old Town High School basketball player sets up for a foul shot during a game against the John Bapst Crusaders on Wednesday, Jan. 8. (Courtesy of Jason Rutherford)

The Crusaders returned to the Coyotes’ home court the next night to face off against the girls teams. The junior varsity secured a 50-31 win and the varsity team wrapped up the Coyotes’ winning streak with a final 42-31 win.

On the girls varsity team, player Hannah Richards picked up the most points of the night with a total of 15. Madelynn Emerson and Sydney Loring collectively put in 14 points for the Coyotes followed up by another 11 points split between Claudia Damboise and Gabby Cody.

Player Lexi Thibodeau also scored a two-pointer during the game, leading the Coyotes to a 42-31 final victory over the Crusaders. The girls’ varsity season record now sits at 6-3.

The boys varsity team played against Hermon on Thursday night but came short of the win by just a few points. Its season record is currently tied up at 5-5.