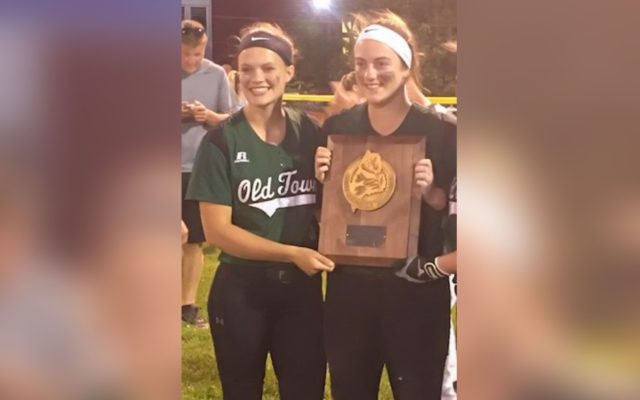 Nina Mahaleris • March 20, 2020
Come this fall, Teagan Blackie and Hannah Sibley will return to the field together again -- this time as college athletes.

OLD TOWN, Maine — Teagan Blackie and Hannah Sibley grew up playing softball together. Some years they played right alongside one another, and other years, on opposite teams.

Now seniors at Old Town High School, the girls have played on the same team for the last three seasons. Come this fall, Blackie and Sibley will return to the field together again — this time as college athletes.

Both girls have verbally committed to play for Husson University beginning in the fall.

Blackie will play both softball and field hockey for the NCAA division III school, while Sibley has committed to softball.

Blackie has loved softball since she first started playing at eight years old. When she came across an opportunity to try field hockey her freshman year of high school, she fell in love with the sport.

With the pressure of sending out college applications approaching,  Blackie was torn between Husson and the University of Southern Maine. That changed when she met the Eagles’ Head Softball and Field Hockey Coach Diann Ramsey, who told her about the program and later offered Blackie a spot on both teams.

“I just felt really at home there,” she said.

Sibley has been playing softball for as long as she can remember — but she started on a team around the third grade, she said. Every summer since fifth grade, she’s played for a travel league.

She didn’t know where she wanted to go to school in the beginning but couldn’t pass up the opportunity to play for Husson when it came along. “Husson’s program just really stood out to me,” she said.

While the current pandemic has halted much of Maine sports, including the Coyote’s upcoming softball season, both girls are trying to look on the bright side: they’ll have four more years together on the same team.

“I guess what’s keeping me at ease is that I have the next four years to look forward to,” Blackie said. “We’ve just been with each other since we were eight with softball.”

The two have stood by each other through the years, always leaning on the support of the other.

“I did not imagine it all, for either of us,” Sibley said about the two of them getting offers to play for the same college team. “I can’t even describe it … We’ve been together all through high school, working hard and pushing each other.”

Sibley and Blackie’s friendship and shared love of softball is evident to their teammates and coaches, too. “They both are very aggressive and passionate about softball,” said Rachel Martin, Old Town softball junior varsity coach.

The duo’s close-knit friendship isn’t exclusive to just them, though. All the senior players on the team have become good friends. Most of them bonded over years of playing together, Martin said. “They’re always at the field together.”

While Blackie and Sibley have different roles on the team, Blackie as an outfielder and Sibley, a first baseman, both have grown into role models for the younger players.  They both have their own unique leadership styles, too, said Jeff Hayward, the team’s assistant coach.

Blackie is a natural athlete, Hayward said. Loud and outspoken, she has the quality traits of an outfielder. Sibley, on the other hand, is more of a quiet but natural leader. “She’s turned herself into one of the best first baseman we’ve ever had.”

Looking into the future, Blackie said she wants to study elementary education at Husson and hopes to become a teacher for second or third grade. Sibley, who’s favorite subject in school is math, said she’s pursuing accounting.

Regardless of their career paths, they’re in it together. “Teagan and I are very lucky that we have each other for the next four years,” Sibley said. “We always want to see each other succeed.”