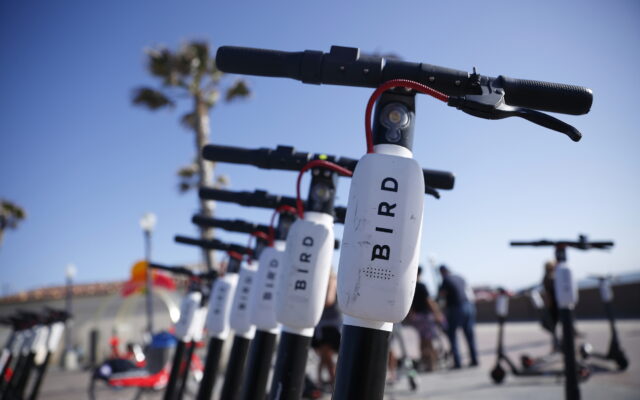 Sawyer Loftus • May 20, 2022
Old Town could become one of the first Maine communities where residents and visitors can zip around the streets on electric scooters if the city OKs a pilot program with a company that has scooters all over the world.

Old Town could become one of the first Maine communities where residents and visitors can zip around the streets on electric scooters if the city OKs a pilot program with a company that has scooters all over the world.

The Old Town City Council next month will consider partnering with a company called Bird, which has programs across the country and internationally that allow people to rent scooters or bikes with the click of a button on their phones.

The council’s Administrative Services Committee on Monday approved taking the measure up as a full council on June 3.

Do you think city officials should approve the pilot program in Old Town?
The pilot scooter program would represent another foray for Old Town into electric vehicles. The city last year approved leasing four electric vehicles for its municipal fleet through an Efficiency Maine program that eliminated the cost for Old Town.

Similarly, Old Town wouldn’t have to pay anything to participate in the one-year pilot Bird is offering, economic development director E.J. Roach said. Bird would manage the fleet, with a local manager responsible for picking up scooters where riders drop them off and recharging them.

Bird has programs in cities across the country and internationally. In the U.S., scooter and bike programs are more common in larger metropolitan areas such as Atlanta, Los Angeles, Denver and Minneapolis. But the pilot program in Old Town wouldn’t be the company’s first in a smaller city.

Old Town would work with Bird to outline where the scooters, which are equipped with GPS tracking, can and can’t go. If riders get too close to an area where they shouldn’t ride, the scooters will turn off, Roach said. Riders also wouldn’t be allowed on sidewalks, as the city’s rules for bicycles would apply to the scooters.

Bird is an app-based program that only allows riders who are 18 or older. Generally, users unlock a scooter for $1, then pay an additional per-minute fee, Roach said.

The scooters are electric, meaning the humans riding them wouldn’t have to do much other than engage the throttle and steer.

Part of the idea behind the scooter pilot program is to reduce emissions. Ideally, the scooters would take people short distances that are too far to walk but not far enough for a car ride, reducing vehicle use in the city, Roach said.

One benefit of the pilot program would be getting the data Bird shares with every city where it operates, he said. That information could help show Old Town how to become more inviting and safer for people to travel by means other than cars, Roach said.

While the program wouldn’t cost the city anything and it wouldn’t be responsible if a scooter ended up in the nearby Penobscot River, some councilors were skeptical.

“I just have a real problem with this concept in the city of Old Town,” Councilor Linda McLeod said.

Bird is proposing a fleet of about 18 to 20 scooters for the Old Town test run. Bird, which approached Old Town about the arrangement, has piloted similarly sized programs in other rural areas.

Montpelier, Vermont’s capital, piloted the Bird program for 60 days in 2018 with mixed results. While riders enjoyed the scooters, some in the city raised safety concerns. Police received about a dozen reports of concern related to the scooters, and at least one of them was vandalized.

Montpelier and Old Town are about the same size, both with about 7,400 residents.

While the proposed program in Old Town would last a year — the city would be able to get out of its contract with Bird with 30 days’ notice — scooters likely wouldn’t be in use during the winter and mud season, similar to how Bird has run in Vermont, Roach said.

Councilor Carol May raised concerns that the scooters could pose a danger to walkers.

“Well, they’re really quiet, so they can scare walkers to death,” she said.