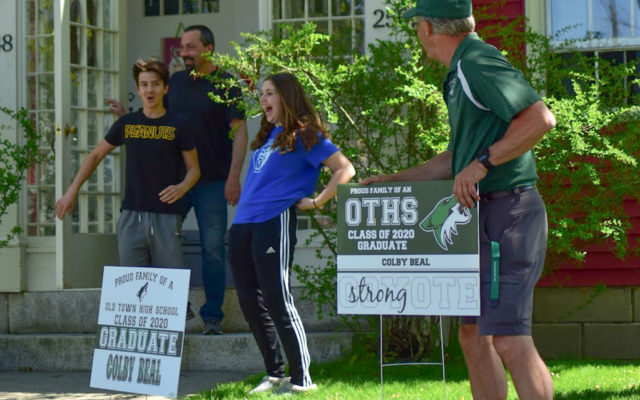 Nina Mahaleris • May 25, 2020
Wednesday morning was a special one for the people who make up Old Town High School.

OLD TOWN, Maine — Wednesday morning was a special one for the people who make up Old Town High School.

The faculty decided to ditch their weekly staff meeting and instead embarked on a parade through the city to celebrate the school’s 120 graduating seniors, whose final year was upended without warning.

Gathering together in the school’s parking lot, at least a dozen staff members decorated their cars with green streamers and taped handmade posters to their windows in anticipation of seeing their students again — even if just for a few moments and from a six-foot distance. 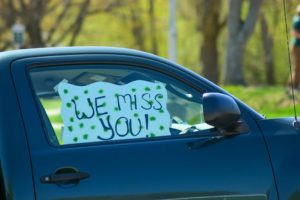 Heather Richards, a health teacher and field hockey coach, tied streamers to the sides of her jeep and hung green Mardi Gras necklaces from the roof for the celebration.

Her son, Bryce, is a senior this year. Richards said he rescheduled a mid-morning appointment that day so he could be around to see the parade and thank his teachers personally.

Athletic Director Jeremy Bousquet arranged celebratory lawn signs, each with a student’s name on the front, and secured the green and white Coyote flag onto the back of his pickup truck before leading the caravan of cars into the city for their first stop.

Down the street, the Beal family was still having breakfast when the procession arrived alongside their house with horns honking. Grabbing the wire stand and custom sign for senior Colby Beal, Educational Technician Lester Cowan hopped out of his car and headed toward the front yard.

He gave Beal a “physically-distant” high-five after sticking the sign in the ground and the caravan pulled away to their next destination. 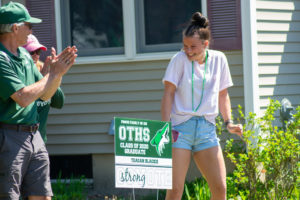 For the next few hours, the parade continued, hand-delivering signs to each of their graduating seniors. Faculty members split into small groups to tackle neighborhoods outside of the city’s center.

Senior Teagan Blackie and her parents stood in their driveway in astonishment as the caravan pulled up their street and teachers cheerfully installed her own sign.

“I wasn’t expecting [it],’ Blackie said, dabbing tears from her eyes with the collar of her T-shirt. “It was so cool.”

Farther away, Claudia Damboise, Bryce Richards, Mikaela Kenny and Sydney Sheehan sat together outside Sheehan’s house enjoying the sunshine when the parade pulled over across the road.

All four are in the top 10 of this year’s graduating class. Sheehan and Kenny are salutatorian and valedictorian, respectively.

The abrupt switch to remote learning towards the end of their senior year has been a difficult and frustrating experience, the students admitted. “We’re still finding ways to stay together,” Sheehan said. 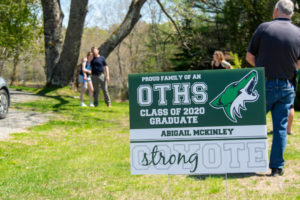 Todd McKinley hugs his daughter Abigail after school faculty dropped off a personalized graduation sign for her on Wednesday morning. (Nina Mahaleris | The Penobscot Times)

“This has made my entire week,” she added.

As the celebration neared the end, School Resource Officer Willy King and Bousquet — who traveled together — reflected on what it means to say goodbye to each other during a global pandemic, without the usual fanfare.

The parade was special for both the students and their teachers, King said, but at the same time, it was sad knowing that their kids were missing out on the traditional graduation ceremony.

“It’s sad seeing these kids not getting what they deserve,” he said.

But Bousquet shared a different perspective.

“To me, it’s refreshing,” he said as he drove around the city, a handful of cars still trailing behind. “At least we get to do something. We get to share some special moments in these kids’ lives.”