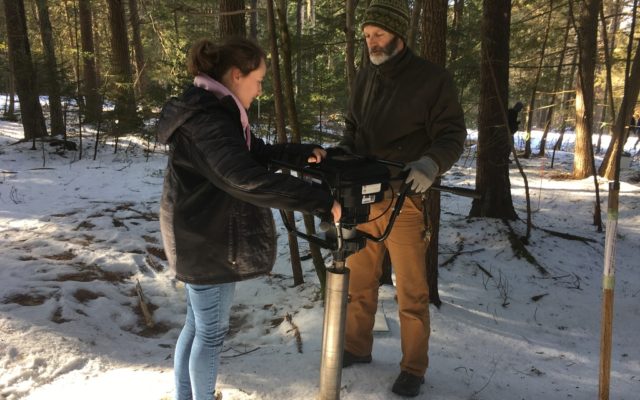 Nina Mahaleris • February 10, 2020
Unlike a traditional science class, the few students in Ed Lindsey’s collaborative research course are collecting data that will help climate researchers at University of New Hampshire’s Institute for the Study of Earth, Oceans and Space study.

OLD TOWN, Maine — While her peers sat in their classrooms learning in the traditional way, Amanda Oertell was trekking through snow-covered trails in her black Converse sneakers, climbing over patches of ice and fallen tree branches toward a research site at the top of a hill. 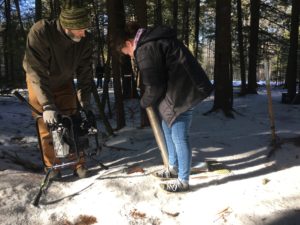 She walked the trail with determination — seemingly not discouraged by the winter chill or frozen ground which she’d soon need to dig into to.  Under her arm, Oertell carried a big cylinder drill pipe under her arm as she hiked to the site with the rest of the group. She would need the drill pipe to collect soil samples.

Unlike a traditional science class, the few students in Ed Lindsey’s collaborative research course are collecting data that will help climate researchers at University of New Hampshire’s Institute for the Study of Earth, Oceans and Space study how regions with historically harsh winters, such as Maine and New Hampshire, are changing over time.

The researchers’ work also studies how the loss of frigid winters and changing weather affects people who depend on those ecosystems — particularly in Maine, where rising atmospheric temperatures have put the state’s fishing and agriculture industries at risk.

[Maine fisheries and blueberries could be at stake due to climate change, report says]

Oertell, who came to Maine from San Francisco three years ago, seemed unbothered by the cold as she knelt in the crusted snow and packaged the soil samples into Ziploc bags with her bare hands.

Alix Contosta, Ph.D., who is part of the all-female research team, said their work is funded for another year by the National Science Foundation, although it’s likely they’ll continue to study changing winters and other regional effects of global climate change for the next 10 to 20 years.

The UNH team asked to partner with Lindsey soon after learning what kinds of research the students in his collaborative research class were doing. Lindsey created the course at Old Town High School years ago to get  his students involved in citizen science. 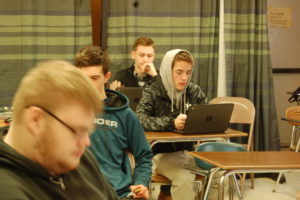 In 2012, he was one of 18 environmental educators selected for a National Presidential Innovation Award for introducing his students to hands-on research. “It gives me a good way to engage students in meaningful science work,” he said at the time.

Oertell joined the collaborative research class after taking an earth science course with Lindsey during her freshman year.

Once the UNH team met Oertell, they felt compelled to encourage her interest in science even further by giving her an opportunity to get involved with their own project on changing ecosystems.

“She wasn’t daunted by the challenge,” Lindsey said of Oertell, who’s also working on her own research of soil microbes and how they function in winter and other seasonal transitions with guidance from the UNH team.

Oertell is the only girl in the group, which inspired the UNH team to apply for a secondary grant from the National Science Foundation to help support her future scientific endeavors.

Last year, the class traveled to Boston for a student research symposium with the GLOBE Program — a NASA-sponsored worldwide science and education program that focuses on the environment. The class is once again hoping to present their studies at the symposium in Connecticut this May.