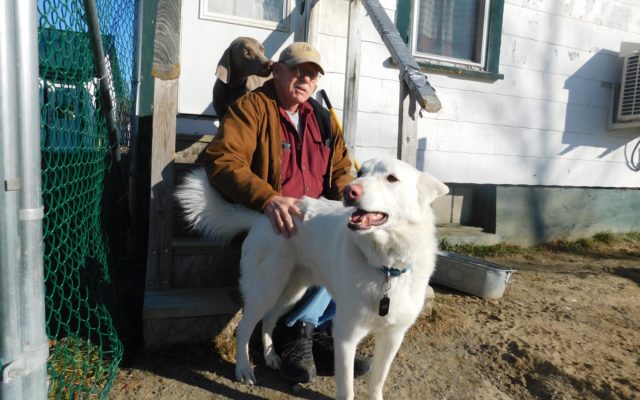 Nina Mahaleris • December 18, 2019
Unlike Bangor, Old Town doesn’t have a proper dog park for community use. There are open areas and parks to bring dogs, but no fenced-in park to play or train in.

OLD TOWN, Maine — Gary Greenleaf’s dogs are feisty. They often chase each other around the small outdoor pen next to his home on Stillwater Avenue, breaking occasionally to enter into a stand-off, accompanied by bared teeth and ferocious growls.

Their intense playing doesn’t worry Greenleaf, though. They do this all the time, he said. Within minutes, they’ll be snuggled up in bed together — they just need to get their energy out.

The small fenced-in yard on his property isn’t always enough space for the big dogs — a white German shepherd and a Weimaraner — so Greenleaf usually takes them out to the woods for a long walk, but he dreams of a bigger area for them to play and socialize with other dogs.

Unlike Bangor, Old Town doesn’t have a proper dog park for community use. There are open areas and parks to bring dogs, but no fenced-in park to play or train in.

So about two years ago, Greenleaf began putting together plans to create a community dog park in Old Town for everyone to enjoy — something more than just a giant yard for Hunter and Chester to tussle in.

Greenleaf, a semi-retired independent equipment broker who splits his time between Maine and Florida, went to Old Town City Council with his desire to build a dog park. Wanting to help, the city offered him an open parcel of municipal land to use near the airport with one string attached: he has to raise the money to build the park. 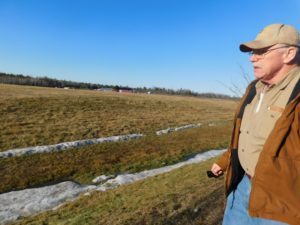 Old Town resident Gary Greenleaf surveys the land that he hopes to build a community dog park on. (Nina Mahaleris | The Penobscot Times)

City Manager Bill Mayo said that this may be the first time a resident has come to the city with a plan to build a local dog park.

Over time, the city has organized other community projects such as extending the University of Maine biking trails, but it hadn’t considered establishing a dog park before — until Greenleaf came along.

“I just think he came up with the idea and no one had really thought much about it,” Mayo said.

While Old Town is already a dog-friendly community, a dog park would give residents a chance to let their pets run and play in a safe enclosure, Mayo said.

Greenleaf’s plan is to design three separate fenced-in yards for the park — a separate area for big dogs and another smaller yard for medium-sized and small dogs. He also wants to dedicate a third area for training.

While he works to figure out how much it will cost to build the park, Greenleaf said he’s looking ahead to getting the community involved to help raise the money themselves.

To him, building the park is more about bringing the community together than anything else. It’s about doing something for the good of the community that will benefit Old Town residents for years to come.

“It’s not about me. Everybody wants to do something to give back,” he said.