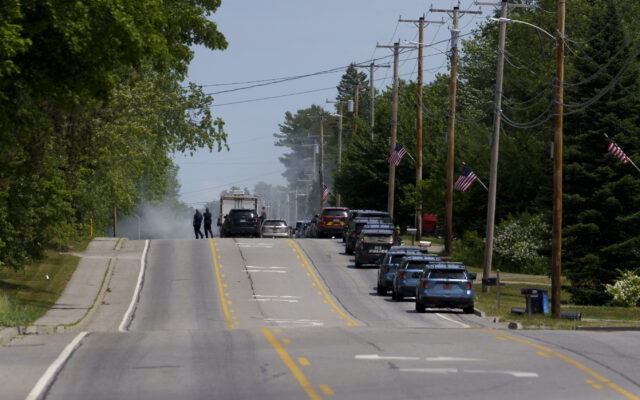 Sawyer Loftus • June 30, 2021
An Old Town man accused of threatening police with a samurai sword and barricading himself in his Stillwater Avenue apartment is out on bail following a jailhouse attack that left him seriously injured.

BANGOR, Maine — An Old Town man accused of threatening police with a samurai sword and barricading himself in his Stillwater Avenue apartment is out on bail following a jailhouse attack that left him seriously injured.

Thadius Wind was arrested by the Maine State Police Tactical Team, ending a 20-hour standoff that had closed a portion of Stillwater Avenue on June 14. Penobscot County Superior Justice Ann Murray ordered him held on $10,000 bail during Wind’s initial court appearance on June 15.

But just three days into Wind’s stay at the Penobscot County Jail, another inmate attacked him and he was taken to Maine Medical Center in Portland for emergency surgery, according to a motion filed by Wind’s attorney Kaylee Folster.

Wind was held in isolation at the jail due to his “fragile state” after he was returned from the Portland hospital. The full extent of Wind’s injuries were not listed in court documents.

“We had a bail hearing last week and I got it lowered. It’s now unsecured with a lot of conditions. He was pretty horribly assaulted in the jail and had to have his jaw wired shut, so it was to care for his medical needs, ” Folster said Tuesday.

The events of June 14 began just after midnight when Old Town Police officers went to Wind’s residence to do a welfare check. Officers could see Wind through his window, holding a  samurai-type sword, according to Officer Catherine Denning’s affidavit.

Wind began to scream at the officers, allegedly threatening to slash their heads off, so officers left the area and called in the Maine State Police.

During Wind’s June 15 court appearance, Lori Renzullo, a student attorney with the Penobscot County District Attorney’s Office, said Wind appeared to be suffering from religious delusions during the standoff.

“He made statements indicating that he was suffering from religious delusions including that he believed he holds an Arc of the Covenant and that his deceased son is God and is talking to him,” Renzullo said during that hearing.

Wind was also arrested on charges related to him allegedly threatening his neighbor and assaulting a police officer on June 2, plus two misdemeanors out of Oxford county. He also has a prior felony conviction for disturbing the peace with a dangerous weapon in Arizona.

The state requested during Wind’s initial appearance that the mental health evaluation process be put in motion, which will subject him to a psychological evaluation to determine his competency and responsibility at the time of the standoff.

As part of his conditions of release, Wind may not use or possess dangerous weapons, must follow recommendations given by mental health experts at the Veterans Administration and take medications prescribed to him.

Wind is next due in court on July 16.