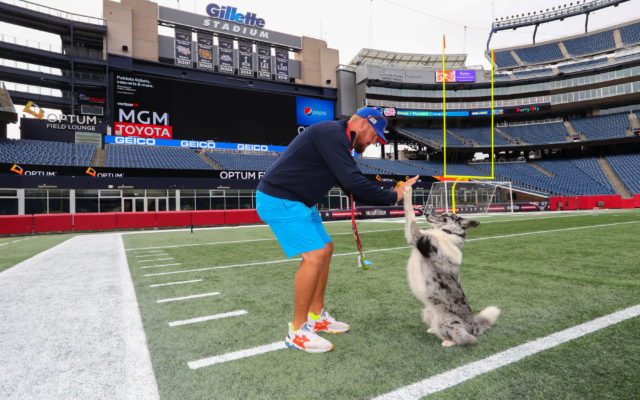 Mike Dowd • November 7, 2019
Ryan Bjorn didn’t play football while attending Old Town High School in the early 2000s, so he never dreamed back then he’d someday be working closely with the New England Patriots. Bjorn, 34, found out life can take some unexpected turns en route to his new position as field superintendent at Gillette Stadium in Foxborough, Mass., home of the defending NFL champions.

OLD TOWN — Ryan Bjorn didn’t play football while attending Old Town High School in the early 2000s, so he never dreamed back then he’d someday be working closely with the New England Patriots.

Bjorn, 34, found out life can take some unexpected turns en route to his new position as field superintendent at Gillette Stadium in Foxborough, Mass., home of the defending NFL champions.

“I’m excited to be back in New England,” Bjorn said, summarizing his reaction to recently landing the job tending to the practice and playing fields used by the Patriots and the New England Revolution of Major League Soccer. “It’s a testament to growing up in Old Town. A lot of people might have negative connotations about the place, but to be educated in that system and grow up there was a great opportunity for me.”

Bjorn’s journey from Old Town to Foxborough began when he worked summers at Bangor Municipal Golf Course and Penobscot Valley Country Club in Orono after graduating from high school in 2003.

“I went to Vermont Technical College to be a landscape architect but it was while working at Bangor Municipal and Penobscot Valley I found out about the turf industry,” Bjorn said.

While in college he interned with the grounds crew at Fenway Park in Boston then worked for a year on the grounds crew at Gillette Stadium. When no full-time opportunity presented itself in New England, Bjorn took a job tending the fields at the Maryland SoccerPlex in Germantown, Md.

Bjorn worked his way up the ranks at the massive soccer facility, which features 21 natural grass fields and 3 artificial turf fields, becoming grounds director there in 2013, a position he held until he learned about the job opening at Gillette Stadium this summer.

“The opportunity presented itself and I was lucky enough to get the job the first week of August,” he said.

“I pretty much walk all the fields and make sure they’re ready to go for what we need that day,” Bjorn said, describing a typical workday. ”We make sure that they provide a playable and safe surface. We want to make sure the players are happy and stay healthy. We do cleanup after practices to fill the divots. You should see the size of the divots NFL players make!”

Divots aren’t an issue on the stadium’s artificial surface but the painted lines for football and soccer have to be applied and removed often when the seasons overlap, Bjorn said.

Asked if he had any interaction with the Patriots players, Bjorn said, “Not really. Our job is to take care of the fields. Their job is to play on the fields. If there’s anything they need they know they can reach out to us. We stay out of their way.”

In addition to the people he works with, Bjorn has a four-legged assistant with an important responsibility. Boyd is a border collie-husky mix whose duty is to keep Canada geese from squatting on the fields.

“I got Boyd when I was in Maryland. We were looking for dogs with natural herding instincts [to keep geese off the fields]. He had the instincts to chase birds. I said I’d be happy to take care of the dog. I had him five years at the SoccerPlex. They were nice enough to let me bring him up here. He’s been a hit at the stadium.”

Bjorn said the dog is all bark and no bite when it comes to his job.

“Canadian geese are protected so he’s well trained not to get close enough to hurt them. We just want to scare them not hurt them. He loves chasing them. He goes into ponds after them,” he said.

Three months into the job, Bjorn said he realizes the hardest tests lie ahead.

“It’s the winter, I’m sure. Maryland has a milder climate and winters are not as severe. Trying to grow natural grass through January and February if the team’s doing well, will be a challenge, along with keeping the fields thawed. For the football team one field has an in-soil heating system. We also can put a tarp over the field and blow hot air under the tarp as well. As long as it’s not rock hard and the footing is good, that’s our goal.”

Having moved with his wife to an apartment in Newton, Mass., Bjorn said the couple will be house hunting soon in the Foxborough area. He said he’s glad to be back within a four-hour drive of Old Town, where he grew up an only child with his mother Laurie Bjorn, a health and physical education teacher in the school system, now retired.

“My early days we lived on Stillwater Avenue by the Y[MCA]. I was a Y rat. We moved to a place on Bachelder Drive and ended up on Center Street. My dad passed away when I was 1. Most of my family is in Kennebunk. But I still have a lot of friends in the area,” he said.

Bjorn admits he didn’t grow up a Patriots fan, but his rooting interest has changed along with his surroundings.