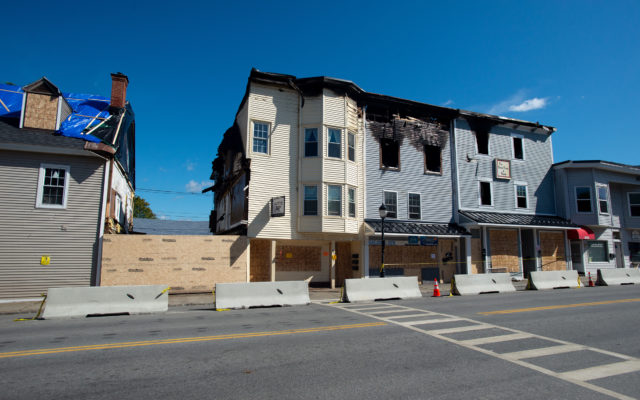 Contributed News • October 30, 2019
As the city looks beyond the fire, it’s offering the owners of those soon-to-be-demolished buildings a deal: In exchange for the Main Street property they currently own, Old Town will give them a piece of a vacant, city-owned lot just up the road that the city has been trying to redevelop for years.

Three downtown Old Town buildings that were damaged beyond repair in the September fire that destroyed much of the city’s downtown are set to be demolished soon.

As the city looks beyond the fire, it’s offering the owners of those soon-to-be-demolished buildings a deal: In exchange for the Main Street property they currently own, Old Town will give them a piece of a vacant, city-owned lot just up the road that the city has been trying to redevelop for years.

The 6-acre, city-owned lot Old Town is trying to swap away housed Old Town Canoe’s operations until 2009, when the company moved to Gilman Falls Avenue. The old brick building on the property located between Main and Brunswick streets was demolished in 2014.

On Monday, Oct. 28, Old Town City Manager Bill Mayo, Code Enforcement Officer David Russell and Economic Development Director E.J. Roach met with some of the property and business owners affected by the fire to discuss rebuilding options and the land swap option. The city’s goal is to retain local businesses and move city-owned land into the hands of developers who can put it back on the tax rolls.

Old Town has considered many uses for the former Old Town Canoe land over the past four years, including a hotel, townhouses and commercial space for local businesses. But the 6-acre parcel in the heart of the city has been vacant for five years.

“We have a significant task helping businesses rebuild, and we have some vacant land up here,” Roach said. “So we’ve talked about a land swap — giving landowners who own property down in this block an opportunity to redevelop a piece of land of greater size up on the Old Town Canoe site.”

Rebuilding on the same downtown block that burned down in the September blaze, whose cause investigators were unable to determine, comes with a disadvantage, Russell said to the landowners Monday.

If building owners decide to rebuild after a disaster such as a fire damages a building, they have to do it within a year or they risk losing some buildable land, according to the city’s zoning ordinances. After a year passes, owners can build only on 75 percent of the land.

“No matter who does anything over there, it’s going to be restricted,” Russell said. “Up there [at the former Old Town Canoe site], we want to take that aspect away.”

“It seemed to be a decent solution to the lack of space and pretty confined nature of these properties to be able to allow a business to be able to do something easier up there,” Mayo said. “It’s in everybody’s best interest to make the bigger picture work. If that site starts developing, that’s going to be a good thing.”

There is no timeline for the demolition, but the city hopes the condemned buildings won’t be on Main Street by the time winter hits.

John Degaribody, owner of 270 Main St., which was demolished during the fire, does not intend to redevelop.

Yama’s restaurant at 268 Main St. was partially damaged, but the city has already turned the building back over to the owner, John Rondo, who said it will be rebuilt.

The other three buildings set for demolition are 272, 274 and 276 Main St. Only one of those buildings’ owners — Michael and Lisa Burton of 272 Main St. — attended the meeting with the city officials, and none has committed to the land swap.

There will be future meetings involving landowners and city officials to ensure that landowners and the city can take advantage of any grants and funding opportunities available to support the redevelopment.