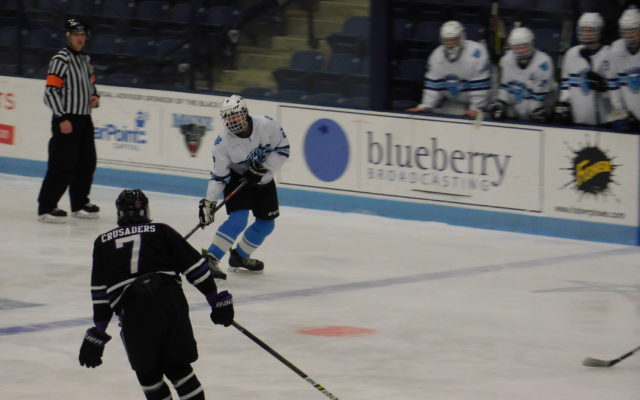 Nina Mahaleris • January 10, 2020
The Old Town-Orono Black Bears took home a victory over the John Bapst Crusaders in an 8-1 game on Thursday night.

ORONO, Maine — The Old Town-Orono Black Bears took home a victory over the John Bapst Crusaders in an 8-1 game on Thursday night. 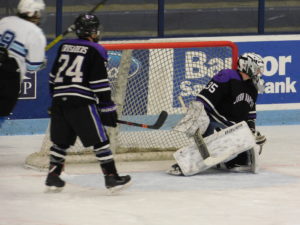 The Crusaders goalie watches out for Old Town- Orono player as he makes his way behind the net. (Nina Mahaleris | The Penboscot Times)

The Bears led the first period with two goals by Tyler McCannell, with one assist from Gabe Talon.

The Crusaders held its own in the first period with player Connor Robbins scoring the only goal of the night. The Bears came out with a ferocity in the second period, putting in five more goals over John Bapst.

Old Town-Orono player Talon netted the third goal of the night which was quickly followed up with scores from Sam Henderson, Dylan Street, Carter Walls and a seventh and final goal again by Talon.

The Crusaders kept up its energy in the last two periods as the Bears pushed on. By the end of the second period, the Crusaders had 20 shots on goal against the Black Bears’ 27. Both sides craved the win, evidenced by the team’s aggressive play. 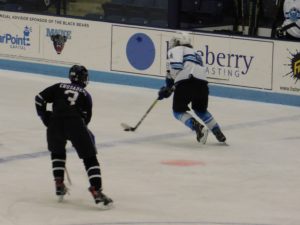 Old Town-Orono player Tyler McCannell carries the puck across the ice as he followed by Crusader, Jeremiah Vadas. (Nina Mahaleris | The Penobscot Times)

John Bapst’s defensive team appeared deflated by the third period, although they’d managed to stop a total of 28 shots on goals by the end of the game. At the other end, the Bears blocked 26, letting in just one goal from the Crusaders.

The Black Bears ended the game with an 8-1 win over the Crusaders. They will play next at 6:10 p.m. Wednesday, Jan. 15, in Brewer. The varsity team will return to the Alfond to face off against Presque Isle at 5:30 p.m. Saturday, Jan. 18.