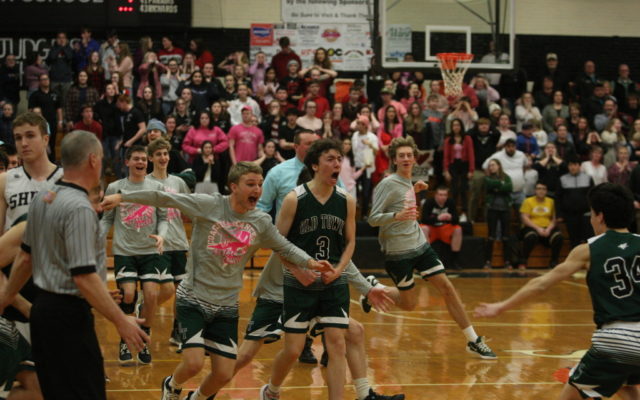 HOULTON, Maine — There is a cliche in sports that it is difficult to beat a team three times in one season, but that was precisely the case when the Houlton and Old Town boys basketball teams met Wednesday night for a Class B North prelim.

The No. 12 Old Town boys pulled off a thrilling 63-62 victory over Houlton on Wednesday night. The Coyotes (10-9 overall) advance to the Class B North quarterfinals 2 p.m. Saturday, Feb. 15 against No. 4 Hermon (12-6) at the Cross Insurance Center.

No. 5 Houlton ends its season with a 13-6 overall record. 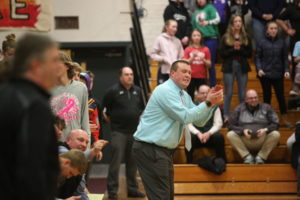 Coming into Wednesday night’s game, the Shires had beaten Old Town twice during the regular season — 53-43 Dec. 27 at home and 65-58 Jan. 25 at Old Town. That fact was something Coyote coach Garrett Libby used to his advantage.

“We talked about playing with intensity and taking care of the ball quite a bit,” Libby said. “When we played them both times [during the regular season] we turned the ball over way too much and that killed us. It sounds pretty simple, but we just needed to execute.”

With 20 seconds left to go in the overtime period, Houlton’s Jaron Gentle sank a 10-foot jumper to tie the game at 62-62. Old Town’s Caden Jackson was fouled to prevent a layup and he sank the first of two free throws for the 63-62 lead with 9.6 seconds remaining.

Houlton had one last chance to seal the victory, but the Shires were unable to get a quality look at the basket and a desperation shot bounced off the front of the rim, giving Old Town the upset victory.

Michael Brown had 16 points to lead the Coyotes in scoring, while Jackson and Bryce Richards both added 12.

“Our boys were certainly ready to play tonight,” Libby said. “They followed the game plan to perfection and really handled the ups and downs of this game. I am really proud of how they handled themselves out there tonight.” 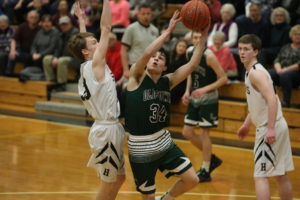 Houlton led 21-12 at the end of the first quarter, but the Coyotes picked up the intensity in the second period, outscoring Houlton 18-10 to cut the Shires lead to 31-30 at the break.

Old Town continued that onslaught in the third quarter racing out to a 47-43 advantage before Houlton battled back to tie the game at 58-58 at the end of regulation.

Libby said if the Coyotes can play with the same intensity they showed against Houlton, the team has an excellent chance to keep the upsets coming.