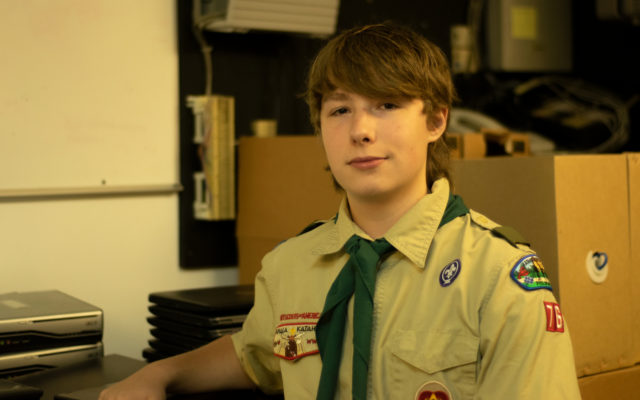 Nina Mahaleris • September 1, 2020
An Old Town teenager is devoting his Eagle Scout project to restoring used laptops and computer devices for local students who need them this school year.

OLD TOWN, Maine — An Old Town teenager is devoting his Eagle Scout project to restoring used laptops and computer devices for local students who need them this school year.

More than 50 percent of families in RSU 34 — which encompasses Old Town, Alton and Bradley — have said they face some challenges in securing reliable devices for remote learning, and 17 percent have inadequate internet access at home, according to a community survey the district conducted this summer.

A national shortage of internet-capable devices, particularly Chromebook laptops, has also challenged the district as it approaches the upcoming school year.

Troop 76 Boy Scout Ryan Kelley hopes his project can help local students by refurbishing donated computers or laptops that can be tailored for remote-learning.

The 16-year-old scout has been interested in building computers since he was little, watching his dad run his own computer technology business.

“I’m pretty passionate about it,” he said.

Kelley initially wanted to host a local electronic waste convention for his Eagle Scout project, where people could drop off used technology to be recycled, and cut down on global e-waste pollution.

But the deadline to pick a community service project was approaching, and he still hadn’t heard back from the e-waste recyclers needed to make it happen.

Then, the troop received a message from Jon Doty, PhD, and RSU 34 school district’s director of curriculum, instruction and assessment, asking if any scouts wanted to collaborate in a service project to provide devices to students doing remote learning this year.

The shift to remote learning proved to be a swift but not uncomplicated transition for many schools across the nation at the start of the pandemic. Families and students have struggled to make the adjustments — some without reliable internet access or devices suitable for remote-learning.

A 2018 Pew Research Center Survey showed that about one in five U.S. teens aged 13 to 17 are often or sometimes unable to complete homework assignments because they don’t have reliable access to a computer or internet connection — a problem that became more prominent for many families, especially lower-income ones, when schools shut down in mid-March.

Approximately 24,000 Maine students — about 13 percent — weren’t able to connect to the internet either because they had no connection or device to use, a Department of Education survey found earlier this year.

State agencies and local communities have tried to help by raising funds to purchase internet-capable devices.

Maine is using $9M to help 24,000 students connect to the internet

“This is a very time sensitive project,” said Kelley, who plans to hold a community-wide device drive next month with the district’s help, in hopes of getting devices out to students early in the school year.

Kelley said he is collecting donations of devices like old laptops or personal computers that are minorly damaged and can be refurbished and reloaded with Chromebook software. He will also accept computer parts such as internal processors, graphics cards along with keyboards, mouses and printers.

With help from his troop, some fellow students and school administrators, Kelley is arranging a team to get the devices ready for the school year. “There are plenty of jobs. No one [will] be left out,” he said.

The donation drive will take place between 9 a.m. and 2 p.m. Monday, Sept. 7, at the Old Town High School, though people can drop off used devices at any RSU 34 school before then.

Kelley asks that people disinfect devices and mark them as donations, and leave them in the school lobbies on any week day.

He’s also asking people who donate personal computers or laptops to bring chargers or other necessary cords, if possible. Volunteers working the drive will be following COVID-19 prevention measures and disinfecting all devices before refurbishing them and handing them over to students, he noted.

Kelley said he’s thinking about continuing to refurbish and distribute devices even after the drive ends, apart from his merit badge requirements.

“Not for my Eagle Scout project, but for the need that is there [locally],” he said.