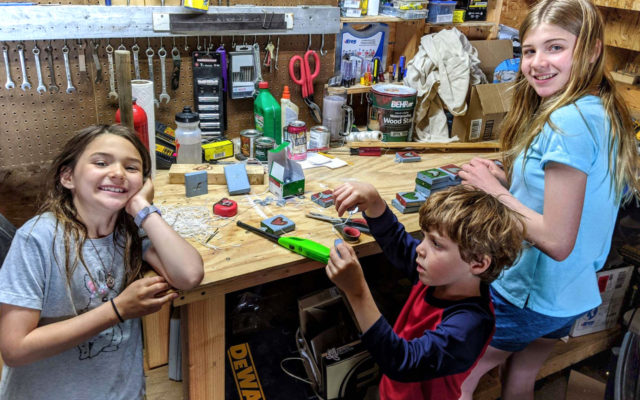 The disease has sickened at least 2,500 and claimed the lives of 102 people in Maine since the state’s first confirmed case of COVID-19 in mid-March. It also has killed more than 100,000 people across the nation.

Powers decided to create a mini-memorial of his own after hearing a story on National Public Radio about the ways Americans were paying tribute to those lost to the disease.

With the help of his three children, Powers cut out small blocks of wood and engraved each with a heart — one for every Mainer who has died from COVID-19 this year.

He strung the blocks together and hung them from a tree in his front yard, behind a post that read, “Burned Hearts: you are not dispensable, you are not forgotten. For Mainers who have died of COVID-19.”

Powers, who grew up in Texas, said he started thinking about the lives of people who have died from the coronavirus and wanted to find a way to pay public tribute to them.

“[I] started thinking about what an enormous tragedy this is and how it’s a struggle for us to memorialize this and start to grieve over this,” he said.

In Texas, hanging tributes to people or events in history is common, Powers said.

People often look at a pair of shoes dangling from phone wires or bottles strung up outside a house as a practical joke, he said. But really they symbolize the memory of a loved one lost or other significant event.

The tribute began as a project just for himself — a way to grasp the magnitude of loss.

For a while Powers worked alone, starting out with 84 wooden blocks — which he later bumped up to 102 to reflect the rising death toll. He branded a small heart into the face of each piece.

His three kids — Nora, 12, Grace, 8, and Owen, 5 — helped string the pieces together to hang them from a tree by the sidewalk outside their home on Route 2.

It was a contemplative experience, Powers said — to hold each piece in his hands and think about the life of the person it represents.

“We live in such a capricious news cycle where we run from one event or one tragedy or one tweet to the next,” he said. “I just thought it was important to slow down and contemplate [the] enormity of the loss.”

His young children began to understand what the blocks symbolized, too. They kept saying, “Dad, this is a lot of pieces,” as they worked, said Powers.

Even though he didn’t know any of the people who have died, the project still serves as a reminder that each person is more than a statistic.

He plans to add blocks for each Maine death to the collection until there’s a vaccine.

“There’s no life that isn’t important, no matter who they were or what their pre-existing conditions [were] or how old they were,” he said.