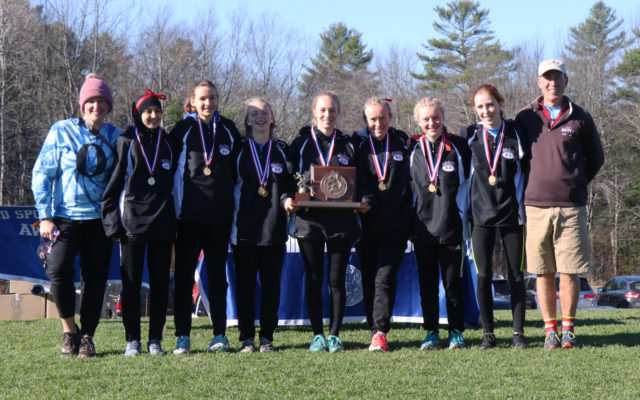 Mike Dowd • November 11, 2019
If you’re keeping track, the Red Riots’ victory in the Class C race at Twin Brook Recreation Area in Cumberland on Nov. 2 was their third state title in a row and sixth in the last eight years. That’s a dynasty with a capital D in any sport.

Another cross country season, another state championship in the record books for the Orono High School girls team.

If you’re keeping track, the Red Riots’ victory in the Class C race at Twin Brook Recreation Area in Cumberland on Nov. 2 was their third state title in a row and sixth in the last eight years. That’s a dynasty with a capital D in any sport.

“I’ve been fortunate to get a group of athletes who work exceedingly hard, are very committed to each other, have been able to believe in themselves, and have prevailed,” said 16th-year head coach Lin White, when asked to explain Orono’s run of success.

The next stop for the Red Riots was a race in the New England championship Sunday, Nov. 10 in Manchester, Conn., a step up in competition that traditionally helps fuel the team’s fire to improve.

Sure enough, the numbers held true.

The Orono girls finished 28th out of 30 teams at the New England race, but White said they competed well.

“We had a good day. It’s a whole different caliber of competition, raising the bar sky high, but the girls performed very well. They set a realistic goal and achieved that,” said White, noting the goal was to not finish last either as a team or an individual.

Junior Erin Gerbi was the top Orono competitor at the New England event, finishing 120th in a field of 260 runners.

The depth and consistency of this year’s Orono team showed up best in the state championship race with four Red Riots finishing in the top eight. Gerbi crossed the finish line third, followed by her younger sister, freshman Megan Gerbi, in sixth; junior Julia White in seventh, and sophomore Nora White, the coach’s daughter, in eighth. Freshman Katherine Kohtala finished a respectable 21st.

Coach White praised Katy Owen, the only senior on this year’s team, for her leadership. “She’s been with the program four years and she had a great year. She’s the heart and soul of the team, a gregarious young person who is very dedicated,” he said.

With the expected return next season of the Gerbi sisters, the two Whites (no relation), Kohtala and junior Amneh Wise, there’s no reason to think the Orono dynasty won’t continue.

“The future looks really good,” White said. “We graduate one senior. Overall we’re a pretty young team. We look like we have a good [freshman] class coming in. I’m looking forward to what we can do.”