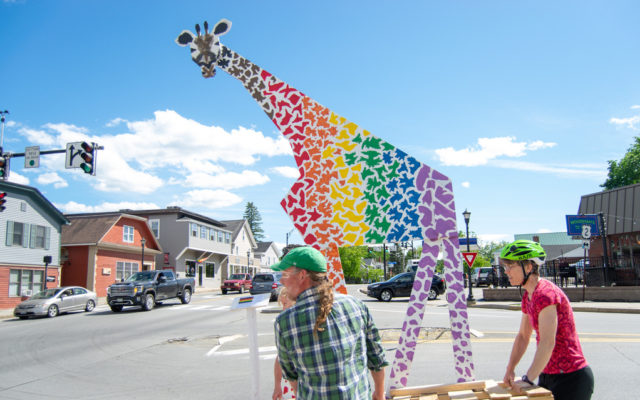 Nina Mahaleris • June 11, 2020
The life-sized sculptures started out as a quarantine pastime activity for Katie Quirk’s family. It was something they’d always wanted to do and during the COVID-19 pandemic, they’d finally found time to do it.

ORONO, Maine — The life-sized sculptures started out as a quarantine pastime activity for Katie Quirk’s family. It was something they’d always wanted to do and during the COVID-19 pandemic, they’d finally found time to do it.

Cobbling together scrap pieces of wood found in their garage, they built their first sculpture — a 7-foot-tall stick-figure parent with a red and yellow striped shirt standing next to a child in a matching outfit, which they proudly displayed along the trails near their Orono home.

That idea has inspired a group of friends to start a series of community-wide projects in celebration of Pride Month that may end up becoming a yearly tradition for the town. 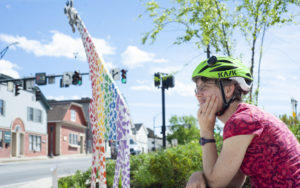 Despite being caught in the middle of a global pandemic and Black Lives Matter protests escalating across the country, the question wasn’t whether Orono’s residents would celebrate Pride, but how exactly would they do it while complying with physical distancing restrictions.

“It felt really important this year given the current state of the world,” said Cami Carter, whose family brought the Pride-themed animal sculptures to life.

With help from her husband and 6-year-old daughter, Carter repurposed scrap wood found in their basement and leftover paints from years of school performances to create four animals — a zebra, ostrich, unicorn and, the latest, a giraffe — to set up around town in honor of Pride.

Carter said they hope to add an elephant in the next few days — if they don’t run out of time and energy. They’re also planning to build between one and three new animals every year to add to the collection. 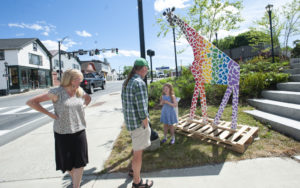 The project is just one way a group of 14 friends from Orono hopes to celebrate Pride and raise awareness about issues LGBTQ people face year-round.

The group is known for its advocacy work. Some members have led similar projects for Pride such as knitting rainbow-colored sleeves for the Brandon M. Silk bridge.

This year, some lobbied the Town Council to paint a rainbow crosswalk in town. Others started rock painting projects in celebration of Pride, or collected donations to hang Pride Progress flags on the bridge near downtown.

The projects have also provided a way to recognize marginalized groups such as transgender people and people of color, while promoting education about the challenges these groups face. 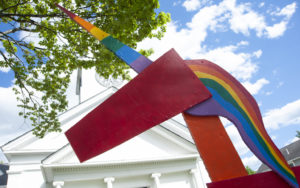 “It’s been a huge education for all of us,” Carter said, getting back to the sculptures. “It’s kind of what we’re facing as white people,” adding that people need to educate themselves about how to work against systemic racism — especially as protests against police brutality continue across the United States.

The education piece is especially important to Ash Cardurns, whose 7-year-old daughter, Lizzy, is transgender.

Cardurns said she felt is was necessary to have visual representations that could help teach people about transgender issues such as disparities in health care and the importance of using correct pronouns.

Since her daughter came out about four years ago, Cardurns said she’s increased her efforts within the LGBTQ community to help raise awareness about these issues. She’s currently raising money for the MaineTransNet’s Name Change Fund to support transgender individuals.

The group hopes that these projects will last longer than just a month.

Meghan Gardner, who owns the Common Loon Public House and serves on the Orono Town Council, said the town is looking into ways to keep these projects going even after Pride month ends.

“It shouldn’t just be about June,” she said. 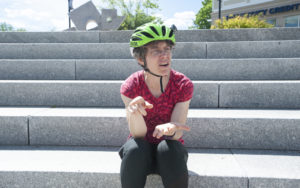 In that spirit, some members have established a new summer program with Orono Public Library to showcase drag performers, including Carrie the One, Mama Martini and Vito Vain, who will record videos of themselves reading children’s stories for families to watch at home.

The performers will be paid through community donations, Gardner said. “The group really wanted to make sure we were doing it right.”

The town hopes to create a work group to establish permanent celebrations for Pride in the future.

“I also really hope that what we have started to put together during this time of social distancing is something we can keep up,” Gardner said.