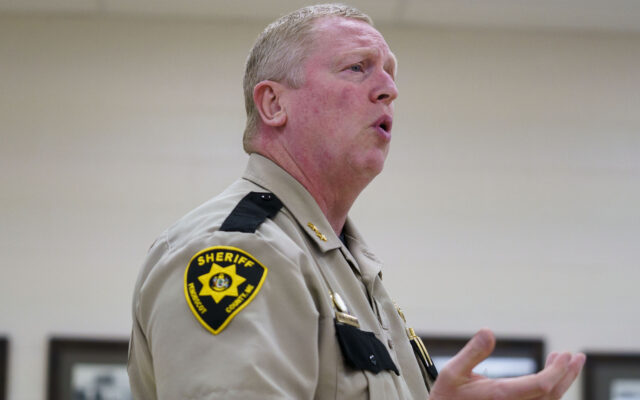 Sawyer Loftus • August 11, 2021
Officers had just finished executing a search warrant that resulted in the arrest of one person in a house of 12 for drug trafficking. According to court documents, the house was a known “drug den” in the area.

MILFORD, Maine — On the night of July 26, Milford residents lined the sidewalks to watch as a caravan of police drove away from a Water Street home.

The officers had just finished executing a search warrant that resulted in the arrest of one person in a house of 12 for drug trafficking. According to court documents, the house was a known “drug den” in the area.

But residents weren’t cheering and applauding the officers as they left; they were booing — not because they were taking their neighbor away, but because they weren’t taking more people away — Penobscot County Sheriff Troy Morton told the Aug. 3 Milford Selectboard meeting.

The July 26 arrest of Brian Adam Corvino was the latest in a string of “high profile” drug-related arrests, Morton said. Deputies arrested at least two other people with ties to the house in the days and weeks prior, according to court documents.

Yet, for some residents, it’s not enough, with some calling for the Sheriff’s Office to clean up all the “druggies” in Milford. But Morton says Milford is not unique in Penobscot County.

“It’s something that we’re seeing statewide — not just in our county,” Morton said the day after the Milford meeting. “But it feels very personal.”

But for Milford residents, the house police hit represents a symbol of the elusive specter of a state and nationwide drug issue. And to police, Milford’s response makes sense but is lacking context and Morton told residents he can’t blame them for feeling frustrated.

“I know it’s a tough thing for our citizens of Milford to hear about the drug problem — it is widespread — one of the positive things I can say, and it probably doesn’t make it easier, this is not the only community,” he said.

Milford doesn’t have a police force, instead, they contract with the Penobscot County Sheriff’s Office to have two deputies provide coverage 80 hours a week.

Since January, there have been over 600 calls for service attended to by the Sheriff’s Office and there were 41 adult arrests — many of those connected to drugs, Morton said.

The most recent arrest, of Corvino, is the latest in a string of arrests related to drug activity at the Water Street “drug den,” according to court documents.

Deputy Richard Polk is one of the two deputies that regularly patrol Milford and in his affidavit, in support of a search warrant of the Water Street house, he said he’s received information from citizens that this house is a major drug hub.

“I have personally received information from concerned citizens that this house is a ‘drug den,’” Polk said. “One person told me [the tenant of the house] claimed, in June, to have had 12 drug overdoses at her house this year alone and ‘thanked God for Narcan.’”

Drug-related crime and disturbances have become such a common nuisance that the town passed a measure in June that essentially gives so-called problem properties three chances until action is pursued against a property owner, Selectboard member Doug Libby said.

Meaning — if police respond to the same address multiple times, particularly for drug issues, after the third time any legal action will be directed toward the landlord rather than the tenant to encourage something to be done, Libby said.

One of the issues at hand in Penobscot County is a lack of crisis resources like detox facilities people in the throes of substance use disorder can go to get immediate help, Morton said.

While the state and the county are resource-rich, vital crisis resources are missing so instead, people go to jail, which isn’t the answer, he said.

“I run the largest mental health detox unit in the state, being the county’s jail,” Morton said. “That’s not what the jail is intended for. Today we are full of those suffering from serious mental illness and many that are impacted by substance use disorder.”

While Morton said he understands the frustration and sympathizes with Milford residents, cleaning up the streets is not as simple as busting down doors and hauling people out, he said.

Rather, it’s like a puzzle, with different pieces coming together from different sources to make a full picture, Morton said.

With that in mind, Morton said he’s asking residents not to give up on his office.