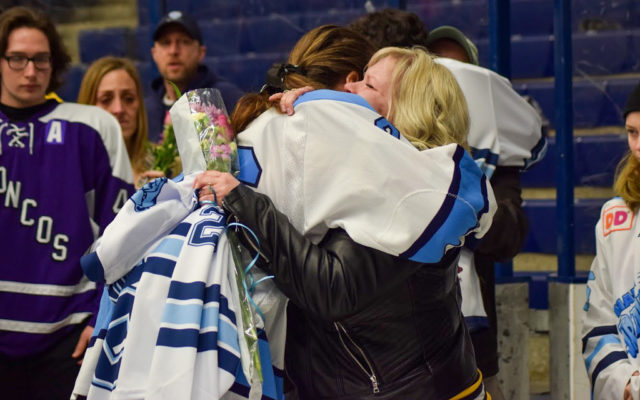 Nina Mahaleris • February 13, 2020
Dylan McInnis first fell in love with hockey after years of sitting beside his dad and watching games on television.

ORONO, Maine — Dylan McInnis first fell in love with hockey after years of sitting beside his dad and watching games on television. But he wanted to do more than just admire players from the stands and follow on television — he yearned to play.

At 10 years old, Dylan was a late-comer to the game compared to his peers, many of whom started at age 4 or 5, his father Chip McInnis said. For the next four years, much of Dylan’s daily life revolved around the sport he loved.

He played for the Maine Juniors Black Bear team and became a mentor with Learn-to-Skate and Learn-to-Play programs, where he shared his passion for hockey with younger players. 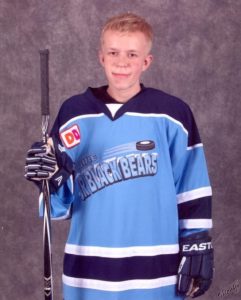 Dylan McInnis, a former hockey player from Old Town, died in his sleep on May 6, 2016 from a congenital heart defect at 14 years old. (Courtesy of Mike Talon)

Dylan was a year-round player, Chip remembered. He often practiced on outdoor rinks in the winter and when the ice melted, he put on his rollerblades, picked up a stick and kept playing.

“Hockey was his thing,” he said.

But Dylan had also inherited a congenital heart defect from his father. So before each season, his parents took him to the doctor for a check-up. In 2016, he was cleared to play — it would’ve been his first year playing for the Old Town-Orono Black Bears.

But one night in early May, 14-year-old Dylan went to sleep and didn’t wake up.

In keeping with the tradition of Senior Night, the senior players lined up side by side and one at a time, each skated to their families who met them on the ice for a photo. The crowd’s wild energy quickly faded and became solemn as Chip and Jaime cautiously stepped together onto the ice, bracing for a moment of silence that must’ve felt like an eternity.

Together, senior players from both teams skated over to the McInnis family who stood on a small rug covering the ice, with two jerseys in hand. Jaime wept as she accepted a retired no. 26 jersey in her son’s honor with their family name on the back — this would’ve been Dylan’s senior night. 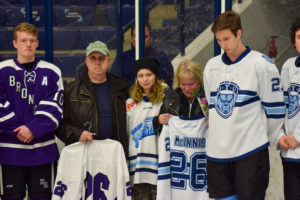 The McInnis family stands for a photo with the Old Town-Orono and Hampden senior players after a tribute to their late son, Dylan. (Nina Mahaleris | The Penobscot Times)

On the other side, Hampden players presented Chip with a purple Broncos jersey and one by one, players from both teams hugged the family tightly. As the McInnises walked off the ice, the players quickly hugged each other before breaking off to their own sides.

Many of the players had grown up together, playing on the same team before being separated by high school rivalries. Old Town-Orono Head Coach Chris Thurlow said he thought all of his seniors knew Dylan.

Not too long ago, the Alford Arena also honored Dylan’s everlasting memory in the rink with a plaque in the entrance.

Hungry for a win to secure a top-seed standing, both the Coyotes and the Broncos came out strong in the first period. Old Town-Orono’s Tanner Evans netted the first and only goal of the night against Hampden, with assists from Gabe Talon and Tyler McCannell.

The Broncos followed it up with a goal by Owen Cross with just over 13 minutes on the clock. Players John Vickery and Sam Economy both scored a goal in the second and third periods, respectively, cinching Hampden’s 3-1 win.

Before retiring for the night, the Old Town-Orono players lined up one by one facing the stands, and slapped their sticks against the ice — a salute to families and fans for their years of support and devotion.

“I thought we played one of our better games of the year,” Thurlow.

Hockey fans watch from behind the boards as Old Town-Orono players attempt to take control of the puck. (Nina Mahaleris | The Penobscot Times)

Although fewer opportunities for power plays throughout the game coupled with a handful of penalties also contributed to the loss.

Old Town-Orono’s offensive line was also challenged by Hampden’s strong goalkeeper, Cooper Ryan, who let in just one of the team’s 32 shots on goal.

The Black Bears found its way to the no. 1 spot after defeating Maranacook over the weekend, but were pushed back down to second seed after Monday night’s 3-1 loss to Hampden Academy. Their season record is 10-5-1 while Hampden’s record sits at 11-0-3.