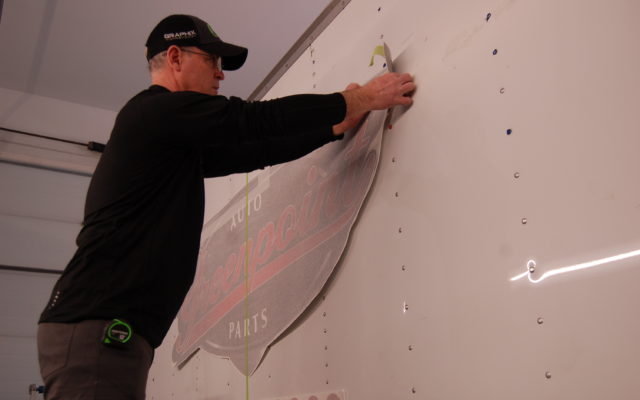 There was no master plan or blueprint to starting a lifelong career in graphic design. In his early 20s, Sullivan didn’t have a solid idea of what he wanted to do — besides opening his own business in Old Town like his father had.

Now 30 years later and operating his own company, Graphix Design, Sullivan reached the pinnacle of decades of work with recognition from a national magazine he’s read since he first entered the game.

“I always wondered if I’d make it in there,” Sullivan said. 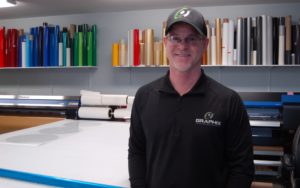 He said that he was shocked when SignCraft Magazine reached out to him last year to do a profile of his shop. The publication featured well-respected graphic designers, so when they asked to interview him, Sullivan felt a wave of validation for his work.

He hadn’t always planned to work in graphic design, though. After graduating from the University of Maine with a business degree, Sullivan worked for an advertising agency for a brief time. Soon enough, he came across an opportunity to start in a new business with growing potential.

A local sign business owner called “Stevie Striper,” who got his name for his speciality of striping the sides of cars, was planning to move away and leave his business in Old Town behind when he took Sullivan under his wing.

For about six months, “Stevie Striper” showed Sullivan the industry and when he left, Sullivan took it upon himself to keep the work going. With no shop of his own, Sullivan packed up his materials and started dropping by local businesses and dealerships to sell his designs.

“I pretty much worked out of the trunk of my car,” he said.

Since those early days, Sullivan has made a name for himself in the Penobscot region — especially with the local truckers and big companies for whom he’s designed logos. Sullivan’s work can be spotted not just in Old Town, but also along the coast and in central Maine.

“Local [businesses] have been my bread and butter,” Sullivan said.

With a long list of local clients to keep him busy, Sullivan seldom has to go out looking for new business like he once did. Still, the orders keep coming — a majority from returning clients like municipalities that need police cars detailed or signs made — he said. 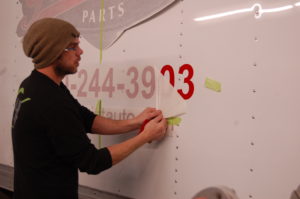 Sullivan’s employee, Brad Davis, finishes off laying out a logo on a truck in their shop on Thursday, Jan. 15. (Nina Mahaleris | The Penobscot Times)

As the business grew over the years, Sullivan searched for someone to help tackle the work. He struggled finding the right person who could match his work ethic and personality — until he met Brad Davis about three years ago.

The two handle all the business themselves — from bookkeeping to helping clients design new logos for their companies — and that’s the way Sullivan likes it.

Looking toward the future, Sullivan plans to keep the operations small to keep serving his customers well. With 30 years under his belt, he has no intentions of slowing down.

“There’s plenty of work … I plan to be doing it for awhile,” he said.