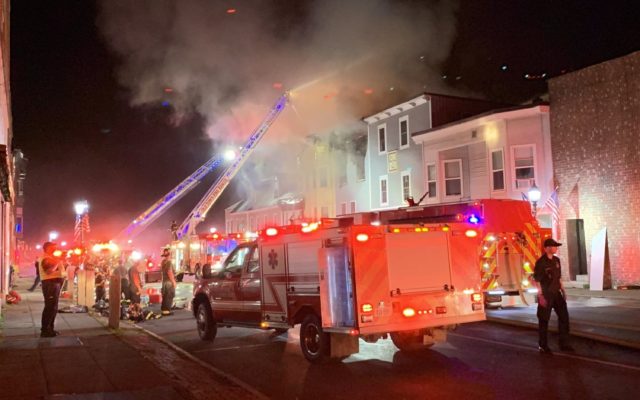 Nina Mahaleris • December 18, 2020
More than one year after a fire consumed a major section of downtown Old Town, state investigators have recommended closing their probe into the fire’s cause after being unable to conduct a full investigation.

OLD TOWN, Maine — More than one year after a fire consumed a major section of downtown Old Town, state investigators have recommended closing their probe into the fire’s cause after being unable to conduct a full investigation.

In the late hours of Sept. 21, 2019, a fire broke out in a third-floor apartment at 274 Main Street. Flames soon spread through the attics and roofs of the connecting buildings, engulfing much of the block.

Unable to access 274 Main Street due to extensive damage, investigators couldn’t determine a cause of the fire, which displaced 11 people. In November, the City tore down three damaged buildings. One building at 270 Main Street had to be demolished the night of the fire.

In a recent report from the Maine State Fire Marshal’s Office, Investigator Larry Morrill stated that he arrived at the scene of the fire after midnight on Sept. 22.

Morrill interviewed a family who lived in the apartment where the fire apparently started but because the building’s roof had already started collapsing, state marshals couldn’t get inside to investigate the origin of the fire.

In a three-page scene report dated Sept. 14, 2020, Morrill stated he believed the fire started in the corner of the living room but couldn’t determine its cause. The wife told Morrill a cigarette had possibly started the fire because it broke out near the spot where her husband was sitting earlier.

The husband told Morrill that his last cigarette was about 30 minutes before the fire and he had put it out on an ashtray. He said he didn’t remember emptying the ashtray into a nearby trash can and had no idea how the fire started.

The family tried extinguishing the fire with water but the smoke soon became too much, forcing them out of the building.

There were no other electrical components in the corner, besides a lamp that was plugged into an outlet away from where the fire started, according to the report.

In his conclusion, Morrill classified the fire as undetermined because investigators couldn’t examine the scene, and recommended the case be “closed by exceptional means.”