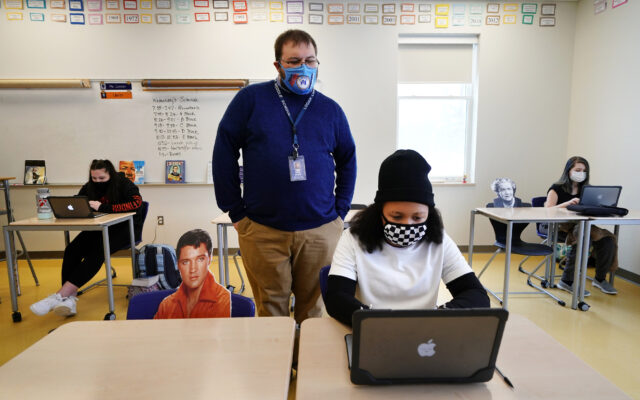 Contributed News • January 24, 2022
Nearly two years into the COVID-19 pandemic that initially shuttered schools, the rapid spread of the omicron variant means teachers are increasingly grappling with the challenges of navigating high numbers of student absences and keeping students up to speed.

Lia Russell, BDN Staff
Some of Valarie Kane’s students have had to stay out of school several times this school year after contracting COVID-19 or being exposed to the virus. Before a recent change in state rules, that meant they were out of school for 10 days each time.

Virtual lessons aren’t really an option for Kane, a kindergarten teacher at Dr. Lewis Libby School in Milford, due to students’ lack of reliable internet access and the challenges of teaching simultaneously in person and online. So Kane sends students home with worksheets to complete during their quarantine, then works to catch them up when they return.

“There are some kids that haven’t missed any days of school, and they’ve been great, but trying to keep [returning] kids up with what we’re doing is very difficult,” said Kane, who teaches kindergarten at Dr. Lewis Libby School in Milford.

Nearly two years into the COVID-19 pandemic that initially shuttered schools, the rapid spread of the omicron variant means teachers like Kane are increasingly grappling with the challenges of navigating high numbers of student absences and keeping students up to speed. At the same time, they’re compensating for a shortage of substitute teachers as colleagues who have contracted the virus or been exposed to it have to stay home from work.

While students and staff are more likely to contract COVID-19 outside of school than in it, schools are far from untouched by the disease. Some 8,673 COVID cases were recorded among Maine students and school employees in the 30 days leading up to Thursday, according to the Maine Department of Education. That was 75 percent higher than the caseload from two weeks earlier.

It’s created the recipe for students falling behind and flagging morale among teachers, Kane said.

“It is really playing havoc with our ability to keep any consistency for any child for a long period of time,” she said, especially since it’s already difficult to hold 5-year-olds’ attention for long periods of time.

A critical substitute shortage also means that there are often few people — or no one — to cover a classroom when a teacher gets sick, exacerbating the burnout teachers are feeling.

Grace Leavitt, president of the Maine Education Association, said a teacher shortage was a concern even before the pandemic, but COVID has exacerbated it. She’s heard from members of the teachers’ union who said they regularly work 80 hours a week, not only fulfilling their own teaching duties but also stepping in for sick coworkers.

“Our ed techs are being hit the most with that,” Leavitt said. “They’re being pulled from their regular assignments and having to cover a classroom, to cover for this shortage.”

In Orono, one high school teacher said more of her students are regularly out sick with the new variant, disrupting their studies.

“There’s always someone who is not in class,” said Shana Goodall, who teaches social studies and was Maine’s History Teacher of the Year in 2019.

“In a normal year, you might have just one or two kids out for a couple days and then everybody’s back.”

Instead, with omicron, at least one to four kids are out at all times, she said.

Orono High School has a robust technology program that allows students to keep up via remote settings like Google Classroom, making it easier to catch them up when they return to school, Goodall said.

Other factors — including conflicts over mandatory masking and pooled testing — have also been a distraction for teachers, Leavitt said.

“It just seems like a lot of energy is going into that, that could be better spent to really support the educators so that we’re supporting our students,” Leavitt said. “It’s taking away from the most important task, and that is educating our kids.”

Most Bangor-area school departments mandate masks in schools, but some parents’ desire to make them optional still regularly crops up at board meetings, even halfway through the school year.

This year, schools began the new year as close to normal as possible, allowing masked sports and in-person learning.

But now, the “moving target” aspect of omicron threatens that return to almost-normalcy, Kane said.

“It seems it’s not as harmful, but it’s still causing a lot of disruption so it is frustrating, very frustrating,” she said.