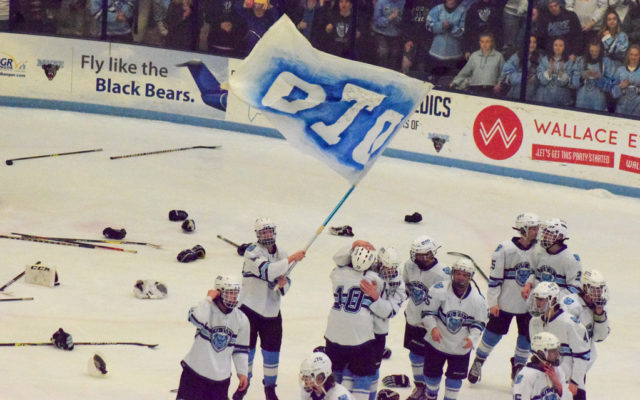 He scored four goals and assisted on two by junior linemate Tanner Evans to lead the second-seeded Black Bears to a 6-2 Class B North championship victory over No. 4 Presque Isle in front of a large and enthusiastic crowd at Alfond Arena in Orono.

It was the third straight regional title for the 15-5-1 Black Bears, who face 16-3-1 Greely of Cumberland Center for the third consecutive year in Saturday’s 1 p.m. state final at the Androscoggin Bank Colisee in Lewiston. 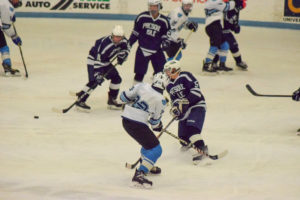 The Black Bears carried the play for most of the evening, outshooting Presque isle 34-21 and spending much more time in the PI end. Old Town-Orono backchecked tenaciously to limit the effectiveness of Presque Isle’s potent top line of Carlisle, LeTourneau and Connor DeMerchant, each of whom has more than 100 career points and had combined for 180 regular-season points this season.

“We’ve got the two best offenses in the league so it was going to come down to who could play the better defensive game and we had the horses who could do it,” Thurlow said.

Thurlow said defenseman Dylan Street had the best game of his career.

“This was the best backchecking game I’ve seen from us this year. We kept them to the outside and let our goalie [Aidan Rand] do his work,” Street said.

Presque Isle coach Carl Flynn said Old Town-Orono changed tactics and severely limited the 3-on-2 and 2-on-1 opportunities that have fueled the Wildcats’ offense all season.

“They didn’t backcheck during our two regular-season games with them but they did tonight,” Flynn said. “They were first on the puck, they were hungry, they wanted the puck.”

The other key was OTO’s rapid response to PI’s goals. The Black Bears scored 34 seconds after PI’s first one and collected the game-winner in the third period only 24 seconds after LeTourneau had tied it up on the power play.

Evans’ game-winner came off a net drive as he roofed the rebound of a Nate Young shot from the point over PI goalie Brandon Poitras.

“We had to respond quickly because we didn’t want to give them any momentum. Their top line is deadly,” Evans said.

“When we give up a goal, we fight right back,” Thurlow said. “We have six seniors who have been through the wars and they know what it takes to not get down after giving one up.”

McCannell expanded the lead with consecutive goals 1:49 apart, the first one coming 1:40 after Evans’ goal. Both came on rebounds as he deposited them into half-empty nets.

“[Thurlow] always tells me to drive the net and I was in the right spot,” said McCannell, who made a perfect, tape-to-tape pass to Evans for the game’s final goal.

“We peppered their goalie,” he added. 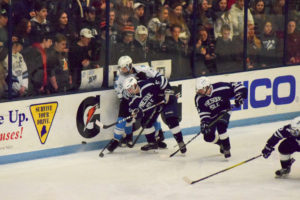 LeTourneau’s tying goal at the 6:18 mark of the third period came off a Carlisle faceoff win as he wheeled and fired the puck past Rand from the inner half of the left faceoff circle.

“They played very intense and didn’t give us much time with the puck,” Carlisle said.

Sophomore Rand made 19 saves for the Black Bears while Poitras, a junior, finished with 28 for the Wildcats.

McCannell’s second goal of the game with 1:12 left in the second period came just 34 seconds after Carlisle had equalized and provided the Black Bears with a 2-1 lead.

He was able to poke the puck free at the defensive blue line and break in alone on Poitras, who got a good piece of McCannell’s 16-foot wrister but it squeezed through him.

Carlisle had tied it with a nifty deflection from middle of the slot off a Carter Jackson wrist shot from the point.

McCannell opened the scoring 2:31 into the game. He was parked at the edge of the crease to the left of Poitras and was able to tip a bouncing wrist shot from the right point by Street over Poitras’ glove.

Old Town-Orono limited the Wildcats to two shots on goal in the first period while generating eight of its own. That set the tone for the game.