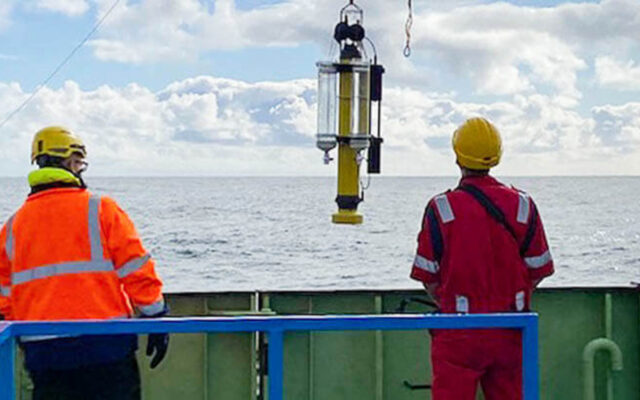 Contributed News • May 14, 2021
University of Maine researchers are participating in a monthlong voyage in the North Atlantic Ocean to investigate the degree to which the visual characteristics of the upper ocean captured by satellites reveal information about plankton communities residing there.

ORONO, Maine — University of Maine researchers are participating in a monthlong voyage in the North Atlantic Ocean to investigate the degree to which the visual characteristics of the upper ocean captured by satellites reveal information about plankton communities residing there.

Teams of scientists from across the country set sail on three research vessels equipped with state-of-the-art technology on April 28 to conduct multiple cooperative studies in the Porcupine Abyssal Plain — a location in the North Atlantic Ocean hundreds of miles west of the United Kingdom that undergoes a vast spring bloom of phytoplankton each year.

These projects aim to help quantify how much carbon from the atmosphere stays in the ocean after organisms absorb it, the fate of that carbon and the role it plays in the carbon cycle and present and future climates.

Emmanuel Boss and Lee Karp-Boss, both professors with the UMaine School of Marine Sciences, are part of an Oregon State University-led study on board the RRS James Cook aimed at describing the upper ocean phytoplankton, its carbon uptake and its optical signatures.

Margaret Estapa, an assistant professor of chemical oceanography also at SMS, is leading another research group attempting to quantify the flux of carbon from the upper ocean down to the depths using robotic vehicles equipped with sediment traps to capture falling particles. Sean O’Neill, a UMaine research associate, is assisting Estapa.

Karp-Boss and Boss are studying the composition, distribution and size of planktonic communities in the top layer of the ocean, while Estapa and her team, which includes co-investigators at Woods Hole Oceanographic Institution, the Moss Landing Research Laboratories and the University of Rhode Island, are quantifying and characterizing the carbon-containing particles that sink into the deep ocean.

Both groups will then attempt to connect the properties of plankton communities and the amount of exported carbon to the visual properties of the top layer of the ocean.

“The export of biological carbon into the deep sea is a key part of Earth’s climate, and this overall research effort is the first to characterize all of its component processes and relate them to satellite observations,” Estapa said.

The National Aeronautics and Space Administration funded this overall project to assess whether the color and reflectivity of the ocean measured from satellites can constrain estimates of how much carbon is captured by surface biology and then transferred to the ocean depths, Boss said.

Boss and Karp-Boss are using various tools such as an automated microscope, which collects about a million images of plankton per expedition, and their impact on the optical properties of the upper ocean.

They are also using an underwater camera system to help quantify where phytoplankton carbon is going by capturing pictures of large particles and zooplankton. The latter consume the phytoplankton at the surface during night, migrate to deep layers during the day to hide from visual predators and release the carbon in the form of fecal pellets that sink.

Estapa is using rain gauge-like sediment traps of several different designs to capture ocean particles and quantify the different processes contributing to the carbon flux into the depths of the ocean. Her team is measuring the chemical composition of the particles and the water column properties around the sediment traps, and collecting detailed imagery and genetic sequence data to connect the sinking particles back to surface ocean measurements.

“It is a large effort with people measuring biology from viruses to large jellies and a variety of physical-chemical and biological properties related to carbon exports,” Boss said.

NASA Export Processes in the Ocean from Remote Sensing (EXPORTS), which also includes groups funded by the National Science Foundation, is overseeing the expedition and several studies involved with it, all of which focus on the carbon cycle and helping quantify the amount of carbon released by organisms residing the ocean surface into the “twilight zone,” or 3,200 feet below sea level.

According to the NASA EXPORTS website, the sinking carbon can be held in the deep ocean from several months to millennia, which can influence the amount of atmospheric carbon and affect present and future climates. The researchers involved with the organization are testing the hypothesis that the attributes of the surface ocean can help predict the release of carbon in the upper ocean and how long it stays in the “twilight zone.”

Hosting an expedition of this magnitude is already a massive undertaking, but required additional support this year to meet safety guidelines for COVID-19, Karp-Boss said.

Researchers spent two weeks in quarantine in a hotel in Southampton, England, during which they took five COVID-19 tests. The crew on the RRS James Cook quarantined and took multiple tests on board the vessel. Karp-Boss said that  once scientists boarded the ship, they and the crew had to wear face masks and dine separately for the first week of the voyage. A team at UMaine also worked with Boss, Karp-Boss, Estapa and O’Neill to set up the expedition, Boss said.

“There is a team of dedicated people who, together with NASA’s Headquarters, worked for months on the logistics to ensure the safety of this expedition, and it is incredible to be here now and be able to do the research,” Karp-Boss said.

This voyage is the second launched by NASA EXPORTS, following one conducted in 2018 in the northeastern Pacific Ocean. Boss, Estapa, then an assistant professor of geosciences at Skidmore College, UMaine professor emerita Mary Jane Perry and former oceanography Ph.D. student Nils Haentjens participated in the expedition.