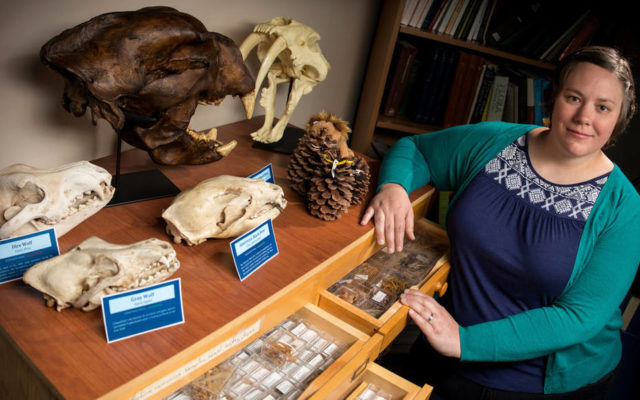 UMaine scientist to explore why ferns flourished after dinosaur era

Contributed News • February 12, 2020
An asteroid strike that killed off the dinosaurs may have simultaneously spurred the growth of natural ferns-- and one University of Maine researcher wants to find out why.

ORONO, Maine — An asteroid strike that killed off the dinosaurs may have simultaneously spurred the growth of natural ferns– and one University of Maine researcher wants to find out why.

Associate Professor Jacquelyn Gill’s research may also help to explain how the natural environment recovers from mass extinction and could even reveal information about surviving Earth’s changing climate.

Ferns — known as vascular plants — have existed for about 350 million years and survived nuclear winter-like conditions — global dimming, cooling and acid rain — 66 million years ago that wiped out dinosaurs and 75 percent of other animals and plants on Earth.

NASA’s Exobiology program is awarding $1,193,212 for the three-year project, of which Gill will receive $343,380. The scientists will conduct interdisciplinary research in the context of NASA’s “ongoing exploration of our stellar neighborhood.”

The team’s findings could prove significant on a grand scale.

Gill and colleagues may uncover information that will be valuable for living in changing and challenging climate conditions on Earth, such as the aftermath of a mass extinction and living on planets that are currently uninhabitable.

They’ll begin by examining how ferns recolonized soon after a large asteroid or comet struck Mexico’s Yucatan Peninsula around 66 million years ago.

The fossil record contains a visible impact boundary layer, which separates information about what the natural world was like before and after the asteroid/comet strike.

The devastation and abrupt climate change after the strike reshuffled the structure of Earth’s vegetation for thousands of years.

While the strike is associated with dinosaurs going extinct, Gill said its impact on plants — which form the foundation of ecosystems across the planet — also was far-reaching. In fact, Gill describes the area as “fern world,” which existed for thousands of years after the impact because forests were leveled and most flowering plants were wiped out.

Ferns produce male and female sex organs and self-fertilize and their dust-like spores disperse long distances and can enter the jetstream. Surprisingly, until now, attributes that made ferns so resilient in the harsh post-impact environment haven’t been explicitly investigated.

This summer, the team will go in the field and visit museums. Along with paleontologists at the University of Wyoming and the Natural History Museum of Los Angeles County, Gill will analyze ancient spores and leaves and their chemistry and shapes. Her research will establish the parameters for the growth experiments that the team’s fern biologists will conduct.

Scientists who specialize in modern flora will grow both ferns and seed plants in chambers that mimic conditions similar to those that existed after the impact — darkness, acid rain, dust, high carbon dioxide and heavy metals in soils.

They’ll then evaluate the plants’ functional traits, including efficiency of carbon and light capture in mature leaves.

Emily Sessa, associate professor of biology at the University of Florida, submitted the abstract titled, “Surviving a Mass Extinction: Lessons from the K-Pg Fern Spike” to NASA.