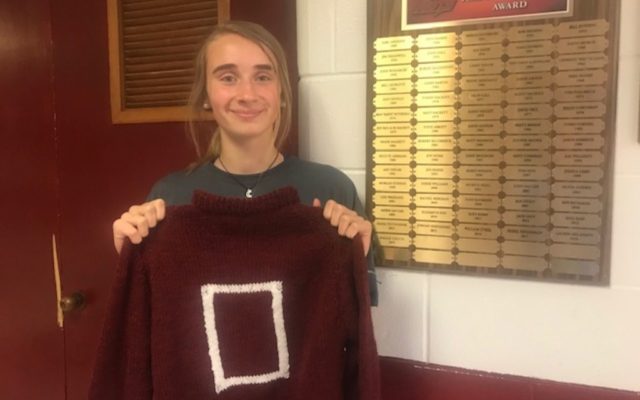 “He was so proud. He never stopped loving Orono,” Archer said.

A prestigious award given out by the athletic department is named in his honor.

The award is presented annually to the Orono High junior who best demonstrates the ideals of outstanding sportsmanship, team spirit, courtesy and team-oriented work ethic.

Burpee was a World War II veteran who played on the Red Riots’ 1932 football team that went undefeated and was never scored upon. He created the award.

It is a heavy wool maroon sweater with a big, white O in the middle.

Goodine’s O sweater was found last year when his family was cleaning out his house after he moved to the Maine Veterans Home in Bangor.

Russ Sossong, Goodine’s nephew, and his wife Dawn Sossong, are getting the sweater dry-cleaned before turning it over to Archer, who will display it prominently in the hallway leading into the Orono gym.

Russ Sossong said Lyn Adkins, Burpee’s daughter, and her husband Randy had sent them a newspaper clipping a few years ago showing Goodine receiving the first Burpee Award. When the Sossongs found the sweater, they contacted the Adkinses.

“We haven’t cleared it with Earl’s family yet but we figured that is where the family would want it to go [on the wall at Orono High]. It’s the only place the sweater should go,” Sossong said.

“It is such a great piece of history for our school. It’s so exciting,” Archer said. “It has great sentimental value to a lot of people.

“It is, without question, the most important award we give in our department,” Archer said.

The Adkinses were surprised by the revelation.

“I couldn’t believe they had it after 71 years,” Randy Adkins said. “It gives me chills to think about it.”

Russ Sossong said Goodine only kept things that had a function, and Adkins said the fact he hung on to the Burpee sweater indicated how much it meant to him.

The Adkinses and Todd Burpee, Lyn’s brother, have been funding the sweater award for several years. Fred Burpee died in 2007.

“The satisfaction and pleasure I get out of seeing these kids rewarded for their sportsmanship makes it all worthwhile,” Burpee told the BDN in 1991.

“I decided to give the award to a junior so they would have their sweater to wear their senior year,” Burpee said. “I think it also helps to inspire them their final year.”

Randy and Lyn Adkins said sportsmanship was at the top of Fred Burpee’s priority list.

“It didn’t have to be the top athlete [in the junior class] who won it. Of course, they had to be [at least] pretty good. But good sportsmanship was the most important part,” Lyn said.

“He enjoyed watching kids play and knowing it was good, clean fun. Whenever someone would knock over an opponent and then help him up, he would get excited about that. You can play hard but you can play nice, too,” Randy Adkins said.

Archer gave Burpee a No. 32 football jersey emblematic of the 1932 football team and also presented him with an Orono High football.

“He kind of tucked it under [Burpee’s] arm at the nursing home and you should have seen daddy’s face,” Lyn Adkins said. “It was a moment of bliss for him. And that football wound up in his casket.”

Archer said Burpee was the first person from the community to go see him when he became the school’s assistant athletic director in 2000. Archer was named the AD a year later.

“You couldn’t meet a nicer man,” Archer said. “He was big on leadership and respect. He felt you should never do anything to embarrass your school, your community or your family.”

Archer said the award is cherished by the recipients and they keep close tabs on the award.

“I can’t tell you how many past recipients will post [congratulatory] comments under the name of the most recent winner on social media. It is a very special award,” Archer said.

The school’s head coaches, athletic trainer and administrators vote on the award. The presentation is made at the annual spring sports banquet for underclassmen.

Winners also receive a screwdriver and two screws so they can add their nameplate to the plaque that displays the names of all the previous winners.

Archer said due to the COVID-19 pandemic which has closed the school and renovations going on at the school, the 2020 Burpee Award probably won’t be presented until the fall.

“It was a very special award and having coaches, teachers and administrators voting on it made it even more special,” said Jeff Paul, the 1997 recipient. “It has given me very good memories, for sure.”