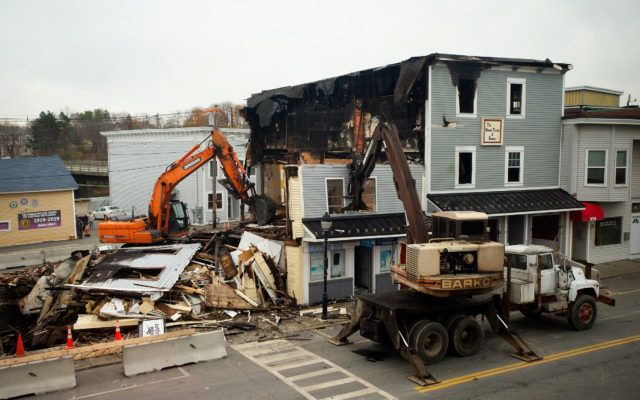 Contributed News • November 7, 2019
Old Town city employees gathered by the windows of the city council chambers in City Hall on Thursday morning to watch as the look of the city’s Main Street changed forever. Three buildings that were damaged beyond repair in a downtown fire in late September were torn down.

Old Town city employees gathered by the windows of the city council chambers in City Hall on Thursday morning to watch as the look of the city’s Main Street changed forever.

Three buildings that were damaged beyond repair in a downtown fire in late September were torn down more than a month later.

As an excavator tore through the century-old wood of the three Main Street buildings like it was cardboard, charred furniture, tenants’ personal belongings and support beams fell down in a heap of debris.

“Now it’s gone, and all the history with it,” City Council President Stan Peterson remarked to City Manager Bill Mayo as both men watched the first building being torn down. “What a shame.”

All three buildings — at 272, 274 and 276 Main St.— were built in the late 1800s. The Sept. 21 fire started on the second floor of 274 Main St., traveled up and spread to the attics and roofs of the neighboring buildings, according to code enforcement officer Dave Russell. Investigators were unable to pinpoint a cause of the fire, which displaced 11 people.

Yama’s Restaurant, at 268 Main St., had a sprinkler system, which stopped the burn on one side of the trio of buildings.

On the other side, the fire didn’t spread from 276 to 278 Main St. because the building was shorter and the attics didn’t line up.

The old white building at 270 Main St. had to be demolished the night of the fire while firefighters were fighting the blaze.

Old Town had awarded $125,000 in grants — mostly state-funded — to help renovate the facades of downtown properties in the 18 months before September’s fire. At least half of the funds went to owners of some of the wooden buildings that were heavily damaged in the fire, Assistant City Manager Travis Roy said in September.

During Thursday’s demolition, a log loader supported the front of the buildings while an excavator claw ripped apart the back.

Within an hour of the demolition’s start, the first building collapsed into a heap of wood as tall as its first floor.

After the city condemned the buildings following the fire, the building owners’ insurance companies decided to demolish them and awarded the contract to Milford-based Thornton Construction.

Thornton crews will clean up the debris and fill the holes from the buildings’ foundations with gravel, according to Dave Russell, Old Town’s code enforcement officer. They are expected to finish the job by the end of Friday.

“I’m sad to see the old buildings in downtown being removed. The town’s never going to be the same,” Peterson said. “But it’s an incredible opportunity for us to modernize downtown Old Town.”