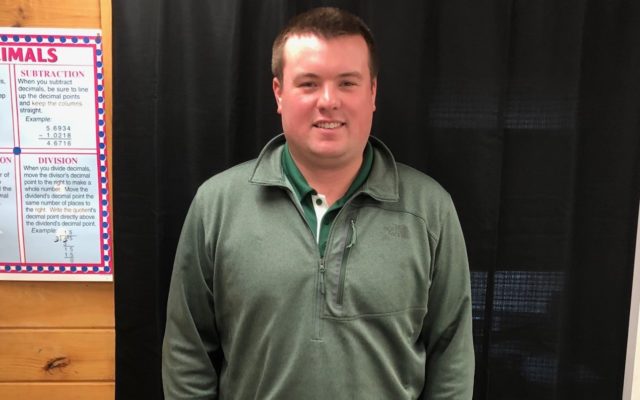 Mike Dowd • October 28, 2019
An Old Town native whose basketball roots can be traced to his grandfather, Don Sturgeon, an All-State player at Old Town High in the 1950s and a star for the University of Maine, Garrett Libby is the son of Janelle Sturgeon Libby and Matthew Libby. He took time out recently to answer 10 questions from the Penobscot Times as the season approaches.

Libby has also coached high school-level AAU basketball the past four years. He spent two years as a varsity assistant coach for the Coyote girls team before becoming the boys junior varsity coach last season. He’s done all this coaching during and after a playing career at Old Town High that saw him earn All-Big East and All-Maine accolades, and a college career at Maine Maritime Academy and Husson University.

An Old Town native whose basketball roots can be traced to his grandfather, Don Sturgeon, an All-State player at Old Town High in the 1950s and a star for the University of Maine, Libby is the son of Janelle Sturgeon Libby and Matthew Libby. He took time out recently to answer 10 questions from the Penobscot Times as the season approaches.

When did you start playing basketball?

“Many people have influenced my game. I have had many great coaches in my lifetime of playing basketball. I would say my most influential times were in high school. My AAU coach Carl Parker was a huge influence. He motivated me a great deal to improve my game and he played a huge role in developing my skills and understanding of the game and how to play it. [OTHS coach] Brian McDormand was another great influence. Both he and Carl had my best interests in mind. They wanted me to succeed and help me however they could to play at the next level.”

“I was 6-foot-3 and played small forward and shooting guard in college. In high school I played everything from power forward to point guard.”

“Not much for career highlights in college as my time was limited due to battling injuries after my freshman year that hindered my ability to play much. In high school I was a two-time Big East Player of the Year award winner; senior year I was a McDonald’s All-Star, as well as a Bangor Daily News All-State player.”

“I graduated high school in 2013. College I graduated in the fall of 2018 from Husson University with a bachelors in business administration.”

“I’m a full-time Ed Tech 3 in alternative education at Old Town High School, as well as running a landscaping business of my own called Mainely Yard Care LLC.”

“I  became a coach because I love working with youth and I have always found great satisfaction in having a positive influence on students and athletes, not just in school and sports, but valuing the life lessons basketball can bring. I have always enjoyed being around the game and passing along the great things the game has brought to me and taught me.”

“I have been very fortunate to have many coaching mentors and influences in my life starting from the young age I began coaching. I have been lucky to have resources such as Bob Cimbollek, Carl Parker, Brian McDormand, my grandfather Don Sturgeon, and many other successful coaches. I am fortunate to have made many great connections with knowledgeable coaches of the game.”

“I applied for this job because it has always been a dream to come back and lead the program that I was fortunate enough to play in for four years. The rich history in this town and my loyalty to this program makes a huge impact on me and my desire to be here.”

“My goals for this program are to develop these players into great people, competitive basketball players, and skilled basketball players. I want my players to learn work ethic, competitiveness, how to be humble, and learn how to succeed. Basketball, and all sports, have a great deal they can teach you. If these kids work hard, listen, and be leaders, they will learn a great deal about life.”