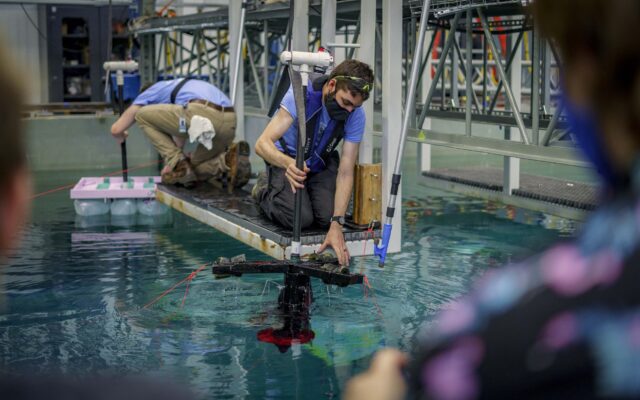 Sawyer Loftus • May 20, 2022
A student renewable energy competition returned to the University of Maine on Friday after a two-year pandemic hiatus, challenging middle- and high-school students from across Maine to create floating platforms for wind turbines that could best withstand wind and waves.

A student renewable energy competition returned to the University of Maine on Friday after a two-year pandemic hiatus, challenging middle- and high-school students from across Maine to create floating platforms for wind turbines that could best withstand wind and waves.

The students’ platforms in the annual Windstorm Challenge were tested in the wind-wave basin at UMaine’s Advanced Structures and Composites Center. Members of the winning high school team were awarded internships at the composites center.

Forty-five student teams from Old Orchard Beach up to Caribou competed this year.

Throughout the morning Friday, students stared over the edge of the basin watching as their platforms faced the trials and tribulations of artificial wind and waves pounding against them. To win, teams had to have the most stable turbine platform and the most professional presentation on their design. 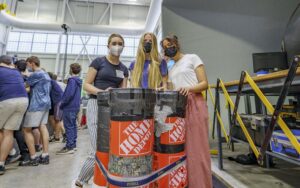 Atherley said the team did a lot of research before designing the platform. Ultimately, team members used plastic buckets, hockey stick tape and glue to create a design that included three tubes that go deep into the water to support the platform and turbine attached to the top, she said.

“I learn so much better when I can just be in there and doing it,” Atherley said. “It just registers better.”

Elkabi said she had fun problem-solving.

“We came across a bunch of challenges, but we just had to figure out how to overcome them,” she said.

That is the spirit of the competition, said Habib Dagher, executive director of the composites center. 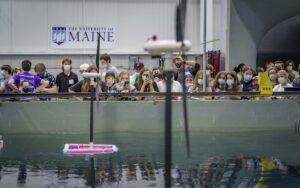 “It’s about learning by doing, and it’s about preparing them for the future,” he said. “The best way to learn is by doing something, building something, testing and evaluating.”

The competition forced students to take knowledge they’ve learned in math and physics classes and books, and apply it to a real circumstance, Dagher said.

“It really brings engineering and the sciences to life for the students, and they get to learn better, so that’s one piece,” he said. “The other piece of it is planning for our future.”

As gas prices rise and the Earth’s climate crisis intensifies, now is the time to continue learning about renewable energy like wind-generated power, Dagher said. The competition allows future leaders to experiment with technology researchers in UMaine’s composites center are working on, too.

“We have a big crisis that we’re facing, and we understand today how fragile our energy systems are because we’re relying on fossil fuels,” he said. “Maine doesn’t control the cost of fossil fuels, but if we convert to renewable energy, we have the ability to control our costs and keep our energy dollars in Maine.” 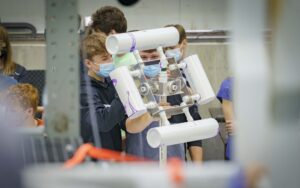 Students gave presentations after testing their designs. Ultimately, three middle school and three high school teams were selected as best in the competition.

Among high school teams, Team 1 from the Somerset Career and Technical Center placed third while Team 3 from the center came in second. In first place was The Flat Earth Society from John Bapst Memorial High School in Bangor. 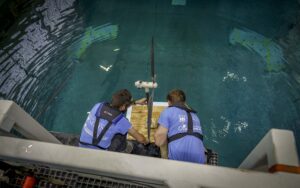