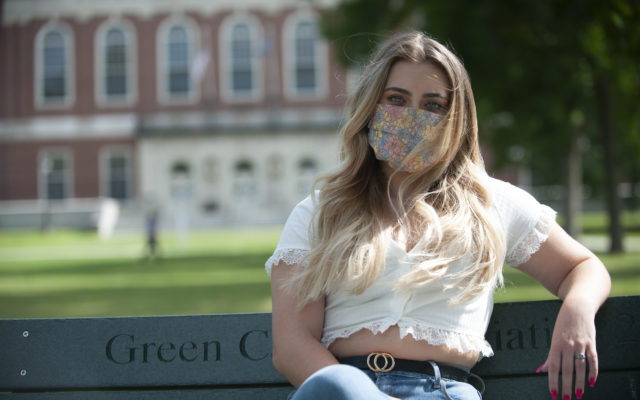 Nina Mahaleris • August 12, 2020
Even with safety precautions in place -- including a requirement that many students go through two rounds of COVID-19 testing -- some students say they’re troubled by the lingering unknowns.

When University of Maine students headed home in March at the start of the coronavirus pandemic, they didn’t know when they’d be able to resume their lives on the school’s Orono campus.

Now, it’s clear they won’t return to the traditional college experience they knew. Instead, they’ll live under several new measures to control the spread of the coronavirus, including a shortened on-campus semester and many classes not being held in person.

But even with safety precautions in place — including a requirement that many students go through two rounds of COVID-19 testing — some students say they’re troubled by the lingering unknowns. The uncertainty comes as a number of colleges across the country have reversed plans to reopen in person amid rising coronavirus case numbers, and as a majority of UMaine professors have said they’re uncomfortable with the return to in-person teaching. 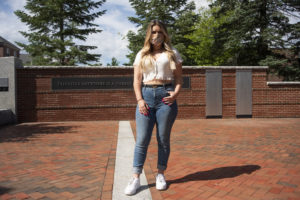 Jordan Merchant, a sociology major, stands in front of a Martin Luther King Jr. memorial on the University of Maine campus on Aug. 6 (Natalie Williams | BDN)

Some students wonder whether their classmates will take social distancing seriously or let their guards down and party in close quarters. Some fear what will happen if the university is forced to shut down again, and that the influx of out-of-state students could turn Orono into a coronavirus hotspot. Many are facing internal conflicts between wanting to be back in the classroom and not wanting to risk exposure to the virus on campus. And others lament the loss of sports and extracurricular activities that define many students’ college experience.

While UMaine is requiring that everyone wear face coverings on campus and keep a safe distance from others, a common worry is that many students won’t adhere to those rules — especially when they’re off campus.

“I think that is kind of a concern on everyone’s mind: who’s going to take it seriously?” Jordan Merchant, an incoming senior, said.

Merchant, a Bradley native who lives in an off-campus apartment in Orono, said she thinks many Maine students aren’t taking the virus seriously because COVID-19 cases haven’t been as high here compared to other states across the U.S.

“I’m worried it might get out of hand,” she said.

For Karim Seifeldin, the worry lies more with how students will behave off campus, where UMaine has less supervision over students’ activities.

“I have a lot of confidence in the university and their procedures. I’m just not sure about the outside world,” he said.

Beyond the social aspects of returning to campus, the potential risk of getting infected in in-person classes, the drawbacks many see in remote classes and the difficulty in navigating a schedule that includes both in-person and remote classes are weighing on students. 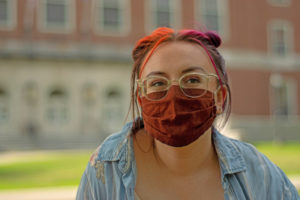 Lauren Genenbacher, 22, an incoming senior at UMaine, has mixed feelings about returning to school in a few weeks during the coronavirus pandemic. (Nina Mahaleris | The Penobscot Times)

“I’ve gone back and forth a lot between being desperate to go back and have in-person classes,”  said Lauren Genenbacher, an Illinois native and rising UMaine senior. But with classes starting in less than a month and with three of her classes being held in person, now she’s not so sure. “It’s a little more nerve wracking,” she said.

Seifeldin, 31, a business student who typically commutes about an hour to school everyday from his home in Exeter, said he’s also worried about potentially juggling a mix of online and in-person classes.

All six of his courses this semester will be in person, he said, but if one or more professors later move instruction online, he’ll be stuck on campus looking for somewhere to study.

Merchant’s roommate, Samantha Reilly, said it’s bittersweet to return to Orono knowing she’ll take the majority of her classes remotely. She’d still rather have as much in-person class time as possible.

Reilly, a fourth-year speech therapy major from New Jersey, said remote learning will also make it more challenging to arrange time to meet with professors to talk about enrolling in graduate school.

Ainsleigh Lucas, a third-year student who works full-time at Northern Light Eastern Maine Medical Center in Bangor, said she would prefer to have either all of her classes online or on campus instead of the hybrid setup she has now.

She said it feels like she’s picking her battles. She could be exposed to the coronavirus at work if she takes her classes online, or she could take all of her classes on campus and risk being exposed there.

“I feel like it’s  kind of out of my control,” she said. “One way or another, I’m risking my exposure.”