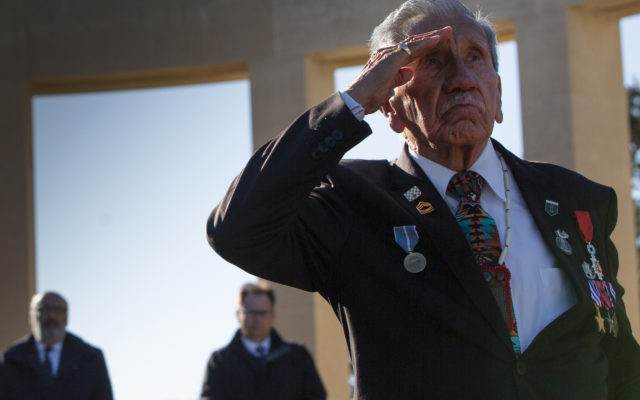 Emily Burnham • June 30, 2020
A new bronze bust of a Penobscot Nation tribal elder and World War II veteran who is credited with saving soldiers’ lives at D-Day will be installed Saturday at Omaha Beach in Normandy, France.

A new bronze bust of a Penobscot Nation tribal elder and World War II veteran who is credited with saving soldiers’ lives at D-Day will be installed Saturday at Omaha Beach in Normandy, France.

The bust of Charles Shay, now 96, will be installed on July 4 at the Charles Shay Indian Memorial at Omaha Beach, a park that also features a turtle sculpture, sculpted by Shay’s nephew, Tim Shay. The turtle sculpture, unveiled in 2017, is a sacred animal in the Penobscot tradition, representing wisdom and longevity. Many Indigenous people refer to North America as Turtle Island.

Shay was the only U.S. World War II veteran to attend the 76th anniversary ceremony earlier this month, with travel from the U.S. to France and other European Union nations still mostly prohibited due to the pandemic, according to the Associated Press. Shay now lives in Picauville, a village just a few miles inland from Omaha Beach.

Shay served as a combat medic during World War II, and was present at the storming of the beaches of Normandy on D-Day, June 6, 1944. He is credited with saving the lives of a number of soldiers, pulling them from the sea and saving them from drowning. He also treated fallen soldiers at the battles of Aachen, Huertgen Forest and at the Battle of the Bulge, and was held as a prisoner of war by German forces until being freed on April 12, 1945.

Shay also served in the Korean War, and was later awarded the Bronze Star and the Silver Star, as well as the French Legion of Honor in 2007.

Shay made annual pilgrimages to Omaha Beach starting in 2007. After many years living in Austria and then another 15 years living on Indian Island, Shay moved from Maine to Normandy in 2018. He resides with Marie Legrand, a longtime volunteer with World War II veterans who come to visit Omaha Beach, and who spearheaded the effort to commission the bronze bust of Shay.