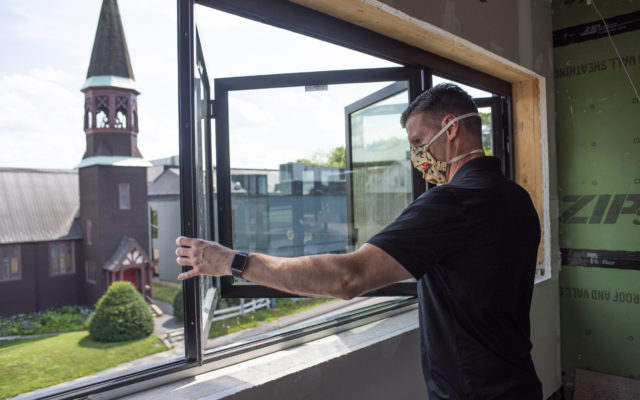 Nina Mahaleris • August 3, 2020
Despite the interruptions from the coronavirus pandemic, Waterfront Concerts promoter Alex Gray plans to open a live music venue and restaurant in his home city of Old Town -- maybe as soon as this fall.

OLD TOWN, Maine — Despite the interruptions from the coronavirus pandemic, Waterfront Concerts promoter Alex Gray plans to open a live music venue and restaurant in his home city of Old Town — maybe as soon as this fall.

Gray initially planned to open the business earlier this year but unanticipated vendor delays and restrictions on large gatherings due to the coronavirus pandemic pushed out his timeline.

Maine’s live music venues have wrestled to keep their businesses alive in the last few months, as canceled shows and crowd limitations have brought profits to a halt. 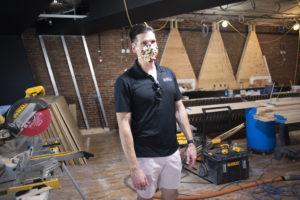 Local businessman Alex Gray gives a tour on July 29 of the renovations happening to create the restaurant and nightclub he plans to open in downtown Old Town. (Natalie Williams | BDN)

On Wednesday, the Port City Music Hall in Portland announced its own closure, blaming the inability to host concerts due to the state’s restrictions on large gatherings.

Gov. Janet Mills eased those restrictions this week, allowing for outdoor events, such as concerts, theatrical performances and sporting events to host up to 200 people, as long as they’re reasonably spaced out.

Gray said he hopes to officially open the restaurant by early fall, if all goes according to plan. Since March, his team from Waterfront Concerts has faced other unexpected obstacles in trying to get the new business off the ground.

When construction had temporarily stopped in the early stages of the pandemic, employees who formerly worked during the concert season stepped in to help with the work.

Ian Desjardins — who is expected to become the new head chef for the venue — is also pitching in along with his own team of cooks, busboys and dishwashers, who now spend their days rebuilding the new space. 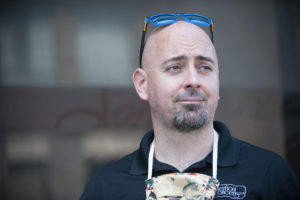 Rich Murphy of Waterfront Concerts gives a tour of the space where they plan to open a nightclub and restaurant in downtown Old Town. (Natalie Williams | BDN)

“Pipe dreams are becoming a reality,” said Rich Murphy of Waterfront Concerts, who will have a managerial role within the venue’s operation.

Murphy — who has a background in liquor sales and distribution — said the team plans to offer an upscale bar and dining experience featuring craft cocktails with artisanal ice they can make on site.

The venue will have three bars — one on the main dining floor, another on the second floor that can double as a conference room or nightclub, and a third on the rooftop deck.

Murphy said they’ll be able to host a myriad of events on the deck, like ice bars during the winter or yoga sessions with brunch in the warmer months. The deck will also have seven fire pits for people to lounge around.

For Gray, this new business is a passion project.

His family founded Old Town Canoe in 1898 — a legacy he wants to continue. 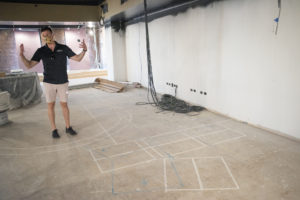 Local businessman Alex Gray stands among the taped off dance floor and speakers in what will become a nightclub in downtown Old Town. (Natalie Williams | BDN)

“I can’t see smashing history,” he said, speaking over the noise of ongoing construction as crews renovated the forlorn buildings along Main Street that were once a part of a vibrant downtown scene.

Gray previously said he hopes that by investing in Old Town, other businesses will follow and revitalize the city. He noted that city officials have helped tremendously with securing permits and code inspections for the project.

The upcoming venue will be called Kanu, to pay homage to the generations of his ancestors and people from the Old Town area who helped build the brand, according to Gray.

He said the hope is that the ‘K’ will stand out, while “still showing respect to those involved for the last [123 years and counting] when Great Great Grandfather George Alexander Gray first started making canoes.”