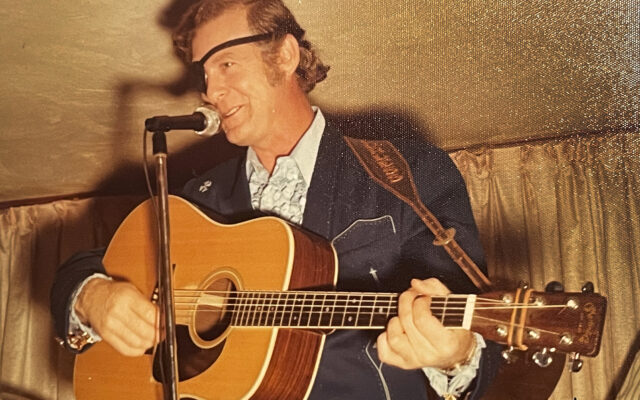 Emily Burnham • January 11, 2023
Outside of New England, Dick Curless is not exactly a household name. Aside from his biggest hit, 1965’s “A Tombstone Every Mile,” he’s known mostly by diehard country fans — but the Country Music Hall of Fame and Museum in Nashville wants to change that.

Many Mainers know and love Dick Curless, the country music singer originally from Fort Fairfield who had a resonant baritone and trademark eyepatch. The singer, who died in 1995, is considered a local hero and Curless’s family members are still making music in Maine to this day.

Outside of New England, Curless is not exactly a household name. Aside from his biggest hit, 1965’s “A Tombstone Every Mile,” he’s known mostly by diehard country fans — but the Country Music Hall of Fame and Museum in Nashville wants to change that.

“Dick Curless sang country music with conviction and commitment,” said Kyle Young, CEO of the hall of fame and museum. “Though he was not a household name, he was admired by his musical peers from Nashville to Bakersfield, and of course by his many fans nationwide. He created memorable and distinctive music that reflected his working-class roots and life experiences.” 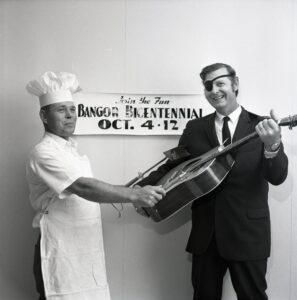 Dick Curless stands with barbecue chef Dan Hamilton, ahead of a community dinner for Bangor’s bicentennial in 1969. BDN File Photo

The exhibit charts the arc of Curless’ career, starting with his childhood in Maine and Massachusetts, where he learned to play guitar and sing at a young age, influenced by legendary country singer Jimmie Rodgers and the singing prowess of his father, Phil. 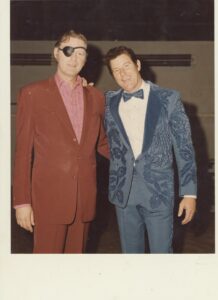 Dick Curless stands with Freddie Hart, both country musicians, in an old photo by Orlando Frati.

Curless served in the Korean War between 1952 and 1954, but even there, his skills as an entertainer were evident as he appeared on armed forces radio. He moved home to Maine afterward, settling in Bangor.

By the early 1960s, Curless was touring around the country, interspersed with periods in Maine of working as a truck driver. It wasn’t until 1965 that he hit gold with his song “A Tombstone Every Mile,” which shot to No. 5 on the charts and put his name on the country music map.

He was signed to a record deal by country star Buck Owens, with whom he would tour around the United States for years. Curless had 10 Top 40 country hits over the course of his career.

While some in the country music industry gave him short shrift as an artist — to this day there’s a belief that if you’re not from the South, you don’t count as a country singer — Curless proved them all wrong. Despite his national success in the 1960s, he never forgot his blue collar Maine roots with “Tombstone,” especially speaking to his origins in hard-working rural Maine.

“I’m really proud of that song, because I worked so hard all my life trying to prove someone from Maine could sing country and western music. And make it,” Curless told the BDN in 1972. “I had this being from Maine kicked in my face for years.”

Curless’ career had slowed down by the mid-1970s, after extensive health problems left him unable to tour with the regularity he once did, though he continued to perform in Maine. After a long problem with alcoholism, he became sober and a born-again Christian, and regularly played community and charity events throughout the state.

After 1974, Curless would not release another album until 1987, when he had a late-career revival, recording three albums between 1987 and his death from cancer in 1995.

Country music lovers and his family have kept Curless’ legacy alive. Ryan Curless, the late singer’s grandson, is an accomplished musician, having played drums with Maine artists for years including Spose, Dave Gutter and Chris Ross and the North.

He said the exhibit has been in the works for years, with his aunt, Terry Chinnock, daughter to Dick Curless and widow of longtime Maine musician Bill Chinnock, spearheading the effort.

“[The museum] came and collected about 1,800 pounds of memorabilia and material that belonged to my grandfather,” Ryan Curless said. “They said they had never seen such a comprehensive collection from the beginning to the end of an artist’s career.”

Among the items on display is his first guitar, which his father’s friend Emery Fields gave to him when he was a child, as well as several other guitars he owned over the years. Fields taught him to play his first guitar. There are also some of the many items of flashy, elaborate, custom-made country music fashion worn throughout his career, such as suede and brocade jackets, a three-piece pinstriped western suit and patent leather boots inscribed with his nickname, “The Baron.”

Ryan Curless said several longtime champions of his grandfather’s music also helped with the retrospective, including Jay Orr and Julea Thomerson from the museum, and music writer Peter Guralnick, who profiled Curless in his 2021 book, “Looking to Get Lost.”

“They all deserve thanks as well for their continued efforts to shine a light on my grandfather’s career,” Ryan Curless said. “We’re all very proud and happy to see this come to fruition.”

“Dick Curless: Hard Traveling Man from Maine” opens at the Country Music Hall of Fame and Museum in Nashville on Jan. 13 and runs through Jan 7, 2024.