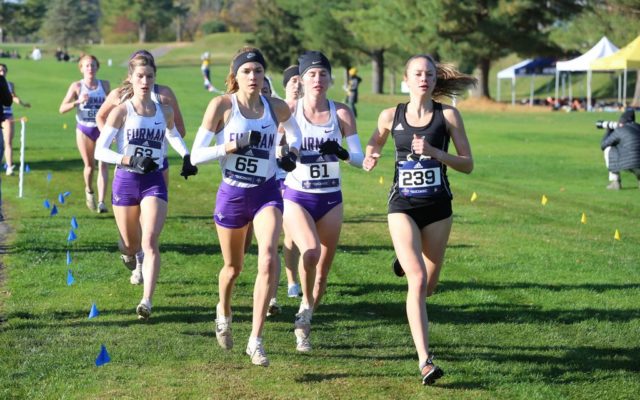 Pete Warner, BDN Staff • April 21, 2020
Steelman is leaving a school of 1,700 students that competes in the Southern Conference for an Atlantic Coast Conference institution with 34,000 students.

Hannah Steelman, a 2017 Orono High School graduate, said she will always be a Wofford College Terrier at heart.

But the All-America distance runner and steeplechaser said her decision to transfer from Wofford of South Carolina to North Carolina State University is in her best interests.

“It wasn’t an easy decision but it was the right decision for me, personally,” said Steelman, who will be a senior at N.C. State this fall. “I wanted to be challenged a little more. You become a better athlete by being pushed by and working with people who are just as fast or even faster than you.”

Steelman is leaving a school of 1,700 students that competes in the Southern Conference for an Atlantic Coast Conference institution with 34,000 students.

“It helps to have that kind of competition around you all the time,” she said. “I want to see what I can do after getting that upper level of competition and experience.”

Steelman will join a team that is coached by Laurie Henes, who has produced 37 All-America distance runners since 1992. Henes was named the head coach two years ago.

“This is an incredible opportunity that I’ve been granted,” Steelman said. “I am so thankful.

“It is an awesome program with awesome people and a great coach. I am super excited. I feel like it is an environment that I am going to thrive in,” she added.

But she also pointed out that she wouldn’t be where she is today without the time she spent at Wofford.

“I love Wofford very much. I love the coach [Johnny Bomar] and the people there. I wouldn’t be the runner or the person I am today without my experience there,” she said. “And they have been nothing but supportive of my decision.”

Steelman’s younger brother Jonathan was a freshman on the Wofford basketball team this year.

Hannah Steelman, who turns 21 on June 9, has enjoyed an impressive career at Wofford.

Steelman is the only Wofford runner ever to qualify for the NCAA cross country championships.

Steelman has already qualified for the U.S. Olympic Trials in the steeplechase. With the Summer Olympics in Japan being pushed back until 2021 because of the COVID-19 pandemic, she will have an opportunity to make the Olympic team.

The trials are scheduled to be held in June in Eugene, Oregon.

“It’s a longshot but I’m getting an extra year to train for it,” Steelman said.

The psychology major, who will have one year of eligibility at N.C. State, plus the 2022 outdoor season because this year’s spring season was cancelled by the coronavirus, said she is impressed by the environment at N.C. State.

“They have a team-first mentality and the girls push each other to be the best they can be. They are supportive of each other and look out for each other,” Steelman said.

Steelman said running at N.C. State will also give her more exposure and will be beneficial in her aspirations to run professionally after college.

“I truly believe everything happens for a reason and going to N.C. State is a step in the process. I’ll see what I can do there,” she said.

This story was originally published at bangordailynews.com.