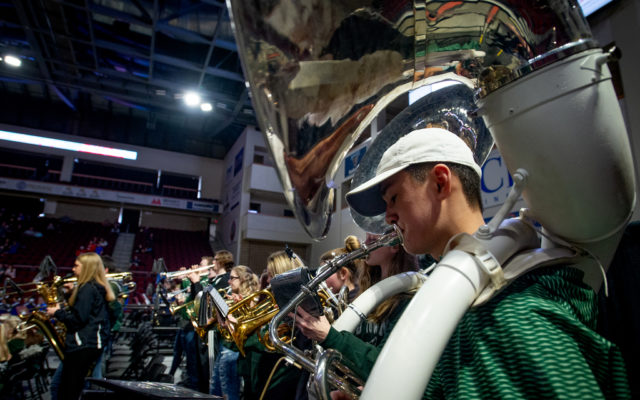 From the courtside, pep bands bring life into the arena at tourney time

Emily Burnham • February 21, 2020
The special ingredient that gives the basketball tournaments held each February at the Cross Insurance Center in Bangor their infectiously positive atmosphere is the horn blowers and drum smashers assembled courtside.

The special ingredient that gives the basketball tournaments held each February at the Cross Insurance Center in Bangor their infectiously positive atmosphere is the horn blowers and drum smashers assembled courtside.

Pep bands — sometimes comprising 40 or 50 kids and sometimes numbering just a handful of student musicians — are the unsung heroes of the tourneys. 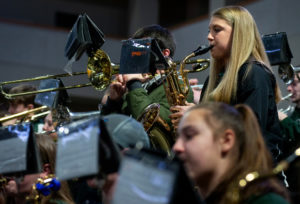 “They bring the life into the place. They get everyone going,” said Jerry Goss, co-director of the tournaments. “It does not feel like the tournaments until the bands start playing. It’s really the thing that gives it the kind of energy you expect.”

Whether it’s time-honored classics like “Sweet Caroline” or “Rock and Roll, Part Two” or contemporary pop hits like “Uptown Funk,” pep bands are the special sauce on the tournament’s 13 days. Regardless of the size of the band, or the resources a given music department has at its disposal, the tournaments are often the biggest stage a high school music program will ever get to play on.

“I think people don’t always understand what a big deal this is for everyone, especially in smaller towns — not just the actual basketball players, but especially for the bands, which often outnumber the athletes,” said Mo LaFlamme, a former band teacher and current district manager for musical instrument supplier David French Music.

LaFlamme, an Old Town native who works with music departments from Portland to Presque Isle, was assisting with Old Town High School’s pep band on Wednesday at the Cross Insurance Center. The Old Town girls lost to Hermon High School that afternoon, but several Old Town athletes went home before the boys game in the evening, grabbed their instruments, and came back to play in the band that night.

“That’s kind of the tournaments in a nutshell,” said LaFlamme. “If you’re not on the court or in the stands, you’re in the band.” 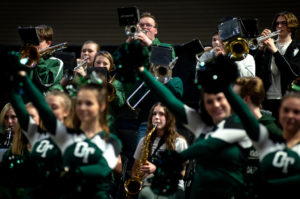 For the students in the bands, it’s hard not to get swept up by the energy in the crowd.

“The best part of it, for me, is just feeling that energy,” said Nathan Regan, a drummer for Old Town. “We love to get the crowd all pumped up.”

As Maine experiences a drop in school enrollments, the arts — music programs included — can often be among the first things on the chopping block when schools face budget cuts. But even as demographics change, the tournaments, with their heartwarming show of community spirit, seem to stay the same.

“Even if there’s only 60 kids in your school, and you’ve only got eight members in your band, it’s still just as exciting for them as it is for the schools with big, established programs,” said Goss. “People take a lot of pride in what their kids do. And the bands still blow the roof off the place.”