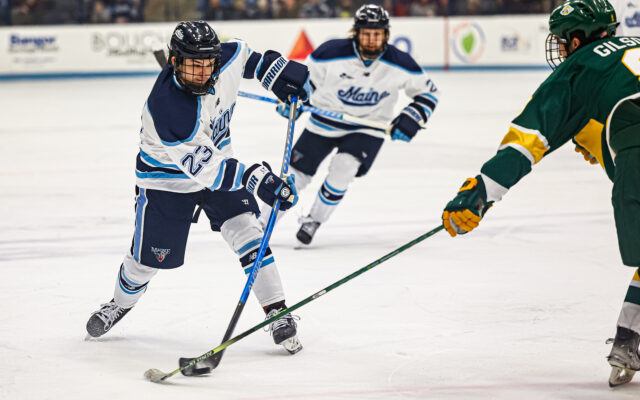 But like his 5-9, 171-pound teammate and fellow freshman defenseman Luke Antonacci, Arnott hasn’t let his size hamper his effectiveness on the blue line. He has played in all but one of UMaine’s 19 games and in addition to taking a regular shift, he is used on the penalty kill and has also seen a little time on the power play.

He has a goal and three assists with his goal and two of his assists coming over his last seven games.

“He is a very steady player. He never hurts you,” UMaine head coach Ben Barr said. “He uses his brain and his skating ability to be effective. He knows when to get himself into physical confrontations and when not to. He thinks the game as well as anyone we have.”

Arnott came to UMaine because Barr sold him on the program and their aggressive style of play that encourages defensemen to jump into the rush and be a part of the offense.

“I’ve been an undersized guy my whole life,” said Arnott, a native of Toronto, Ontario. “So you learn to play defense in a more stick-and-feet kind of way, not an overly physical way.”

He admits that playing at the Division I level has been an adjustment, as the players are bigger, stronger and older than those in the junior leagues.

“You want to shut them down as soon as possible,” Arnott said, noting that you want to confront an opponent as soon as possible after they receive a pass so they can’t build up a lot of speed. And positioning is also important, particularly during the puck battles in the corners and behind the net.

“His size doesn’t make a difference with the way he plays,” UMaine senior left wing Ben Poisson said. “He sees the game so well and, because he is such a good skater, he sticks to you like glue.”

“I am making strides, for sure. Being in the gym with Codi, I notice that I am definitely getting stronger,” said Arnott, who added that the six weeks the team spent together on campus this summer participating in optional workouts has also been beneficial.

“He very rarely puts himself in situations where he doesn’t know what to do with the puck. He always puts himself in position to make plays and he makes plays some guys wouldn’t see,” Ostman said.

He is constantly working on his shot.

“It doesn’t have to be 100 mph but I want it to be heavy and hard and I want to get it to the net because it can cause chaos for sure,” Arnott said.

Arnott played for the Penticton Vees in the British Columbia Junior Hockey League and helped the Vees win the Fred Page Cup title last season, an award that goes to the playoff champion. He had 6 goals and 31 assists in 48 regular season games and a goal and 6 assists in 16 playoff games.

“I’m excited about them coming next year. They will help the offense and they’re great guys, too,” Arnott said.

After a loss and a tie at Colgate following the Christmas break, the 1-0 and 4-3 (overtime) wins against the University of Alaska Anchorage improved UMaine’s overall record to 8-9-2 entering this weekend’s home Hockey East series with No. 16 UMass Lowell (11-8-1) at 7 p.m. both Friday and Saturday.

“We didn’t get the results we wanted at Colgate but we’re on the right track getting back to the way we played before the break,” Arnott said. “And we’re hoping we can get there and exceed that.”

Arnott said he would like to chip in a few more goals and keep improving over the second half of the campaign.

Barr said if Arnott can continue to get stronger and improve his shot, “he is going to be a real good player for us.”