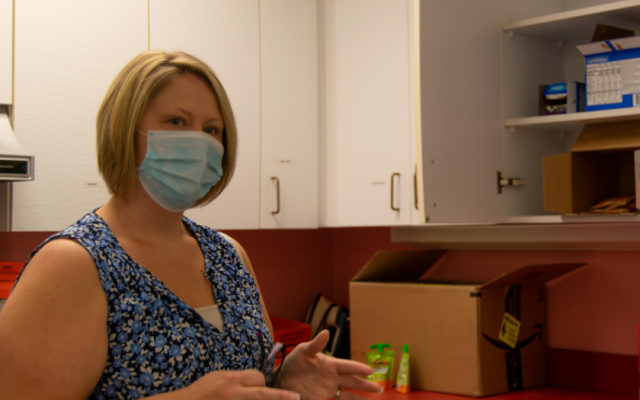 Nina Mahaleris • June 15, 2020
While school districts around the state figure out what the upcoming school year will look like, the Lewis S. Libby School in Milford is securing resources to support students through the pandemic.

MILFORD, Maine — While school districts around the state figure out what the upcoming school year will look like, the Lewis S. Libby School in Milford is securing resources to support students through the pandemic.

The elementary school was recently awarded a $10,000 donation from the Verizon Authorized Retailer Wireless Zone in Bangor, which the school is saving for the fall.

When the school shut down, the school’s Counselor Angela McDunnah began looking for ways to help support students and teachers who were struggling to transition into remote learning.

So she reached out to someone she knew at the Verizon store about educational programs that could improve internet access or devices students could use at home. For a while, she didn’t hear anything.

A few weeks later, the company told her they wanted to give the school $10,000 to help pay for educational resources.

“I was in shock for a long time … I wanted to make sure the zeros were correct,” McDunnah said.

While the school hasn’t settled on how to spend the money, they’re hoping to save it for the upcoming year to cover anything they need to support students. “We have ideas but we really want to make sure that we use it wisely.”

In addition to the donation, Milford was one of many schools this year to receive tablets from the state as part of $9.3 million through the Governor’s Emergency Education Relief Fund to improve students’ internet access.

We were so grateful that the state recognized that internet access was an issue and tried to help, McDunnah said, but the tablets didn’t arrive until the end of the school year.

“It’s hopefully something that’s going to be useful in the fall,” she said. Despite the challenges of transitioning to remote learning, McDunnah said the community has come together to support the school in big ways.

In April, Dairy Queen started giving away free mini blizzards so the school could continue their weekly drawings to reward students who exemplified the school’s values. Dunkin’ donated six gift cards as prizes for the teachers’ own drawing, and Hannaford offered balloons for free so teachers could decorate their cars for a procession through town.

Casella also offered to donate money to stock the school’s resource center with help from Orono IGA, so local families can pick up food when they need it throughout the summer, she added.

These small acts of goodwill are helping to keep the community feel supported during the pandemic. “It’s really about everybody feeling valued and making sure that we’re supported as a group,” McDunnah said.

McDunnah said she’s also spent more time connecting with students and their families through Facebook to give them some sense of consistency.

She began to livestream the weekly drawings so students could watch at home and posted photos of the school mascot hiding in different parts of the school and the kids could guess where they were.

“Our students are confused and scared on all different levels of the spectrum … We’re doing the best we can to support them,” McDunnah said. “We’re in this together.”