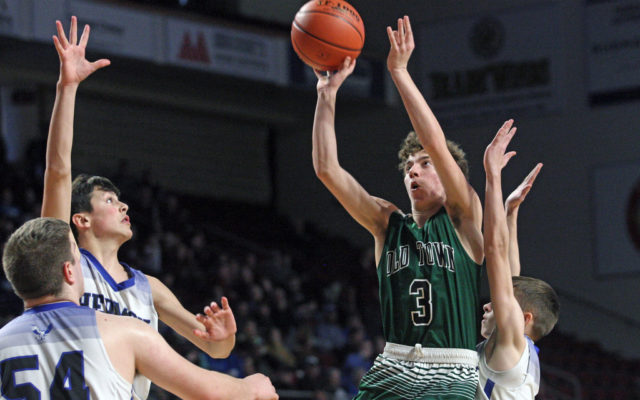 Joseph Cyr, Houlton Pioneer Times • February 17, 2020
The Cinderella story of the Old Town boys basketball team continues to write a new chapter as the No. 12 Coyotes beat No. 4 Hermon 47-42 Saturday in a Class B North quarterfinal at the Cross Insurance Center in Bangor.

The Cinderella story of the Old Town boys basketball team continues to write a new chapter as the No. 12 Coyotes beat No. 4 Hermon 47-42 Saturday in a Class B North quarterfinal at the Cross Insurance Center in Bangor.

Old Town (11-9) used a 9-0 run at the end of the first half to take a 24-21 lead into the break and continued to show poise under pressure in the second half en route to the win.

The Coyotes advance to the semifinals where they will take on No. 1 Caribou 8:30 p.m. Wednesday, Feb. 19. 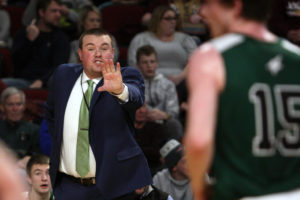 Junior Shawn Hoggterp led Old Town offensively with 15 points, all of which came in the first half of play. Seniors Bryce Richards and Mike Brown both added eight points for the Coyotes.

“Earlier in the year we had a couple of tight contests with Hermon, and in both of those games we didn’t respond to game situations,” Old Town coach Garrett Libby said. “We played hard today and had a positive attitude throughout and that has resulted in a huge turnaround for us.”

Libby said the Coyotes stuck to their game plan for much of the contest, trying to limit Hermon to just one shot opportunity, while making the most of their own chances.

“We had some guys come off the bench in the second half that really gave us a spark,” Libby said. “I give a lot of credit to Ethan Hayes, who didn’t make it in the game in the first half, but comes in [in the second half] and was a huge boost for us.” 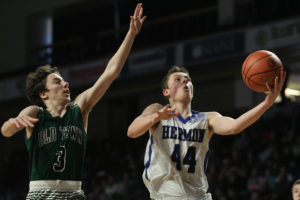 “My first year as a coach, to come here and get the win … that’s pretty fun,” he said. “I give all the credit to the guys. They played hard and really wanted this win.”

Jaeden Henderson paced Hermon with 15 points, including seven in the fourth quarter.

Hermon and Old Town met twice during the regular season with the Hawks winning both contests — 56-45 at Old Town and 43-40 at home.

Hermon was without its leading scorer, Isaac Varney, who has a sesamoid fracture in his right foot.

Hermon finishes its season with a 12-7 record.