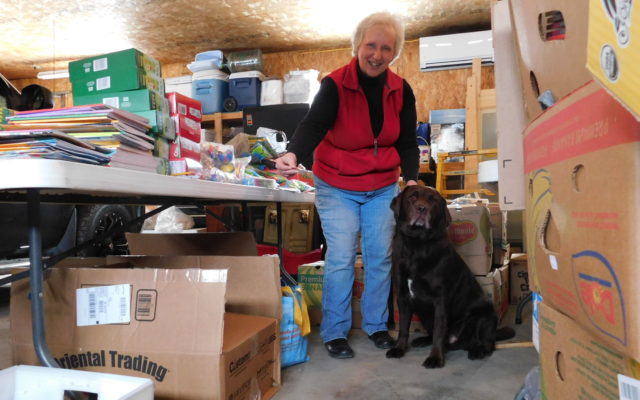 Nina Mahaleris • December 8, 2019
The Old Town Rotary Club is supplying families in need with food for the holidays for the second year.

OLD TOWN, Maine — The Old Town Rotary Club is supplying families in need with food for the holidays for the second year.

Even more so during the Christmas season, families struggle to make ends meet. Some parents have to make tough decisions like whether to spend $20 on their child’s gift or feed the rest of their family for a couple of days, said rotarian Linda Bryant.

And that’s where her work began.

“Last year I started doing birthday bags for the schools … because families are having a difficult time. They’re struggling,” she said. “It’s hard decisions they have to make.”

So, she came up with an idea to help make life a little bit easier for those in her community. With the help of the Rotary Club, Bryant put together birthday bags stocked with cake mix, frosting, balloons, cookware and little toys for kids at Old Town Elementary School.

When that job was done, Bryant wasn’t ready to stop. She knew there was more to be done so she asked Jeanna Tuell, principal at Old Town Elementary School, how else the rotary club could help.

So Bryant and her team of rotarians did just that. They put together dozens of Christmas stockings with little toys, candies and books for children.

“It’s not what’s in the stocking — it’s just that the child has a stocking for Christmas morning,” she said.

This year, the club is taking its goodwill projects a step further. With the help of city employees and other people in the community, the club has raised at least 36 boxes of donated items for families in need and put together more Christmas stockings for children. 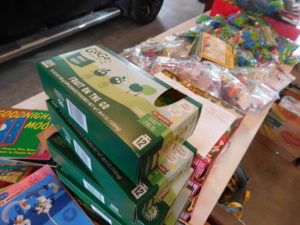 Boxes filled with non-perishable food items and Christmas trinkets fill up Linda Bryant’s two-car garage the week before giving them out to families in need. (Nina Mahaleris | The Penobscot Times)

This fall, Bryant was looking on Facebook and caught an idea to do a reverse advent calendar in which people could pick a day to donate at least one non-perishable food item during the month.

Some people donated one item but more people gave an entire month’s worth of food for the cause — so much so that Bryant couldn’t emotionally prepare herself in advance for such a strong community response.

“It’s kind of overwhelming to be quite honest,” she said. “My garage is trunked full of stuff for these boxes and these Christmas stockings [and] there are another 20 [boxes] to be picked up Friday morning.”

In November, Bryant received NEWS CENTER Maine’s 2 Those Who Care Award for her service to the Penobscot community. She thought they were making a big fuss over nothing, she said, because to her, giving isn’t about public recognition or fancy awards — it’s about helping others.

“You just do what you can do to be a better human being,” said Bryant.

Bryant’s concerns about food insecurity in her community are not unfounded.

According to the United States Department of Agriculture, an estimated 11.1 percent of American households were food insecure at some point last year. Out of all of New England, Maine topped off with the highest rate of food insecurity between 2016 and 2018.

The rate of food insecurity is actually higher than the national average in Penobscot County — at 14.4 percent — according to Feeding America.

One way to gauge how many families around the state are food insecure is by looking at the number of Maine students who are eligible for subsidized meals. 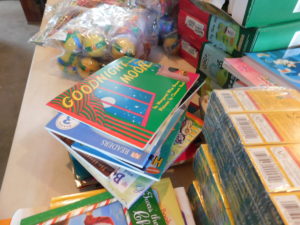 Across the board, schools are seeing increases in the number of their students who qualify for free or reduced meals. In the last decade, this number has generally fluctuated between 30 and 50 percent, but some regions have observed even higher rates over the years.

At the Dr. Lewis S. Libby School in Milford, 55 percent of the students get free or reduced lunch and a high number of families in the community are also food insecure, said school counselor Angela McDunnah.

Jennifer Goodwin, director of the RSU 34 school district resource center, added that more than half of its students — about 800 — also get subsidized meals.

With a high need for food security in the area, local organizations and community people have stepped up to help, like the Old Town Rotary Club, Goodwin said.

Next Friday, Bryant and her fellow rotarians will collect the boxes that couldn’t fit into her two-car garage. With the help of the local police and fire departments, the club will then head out to nearby elementary schools that will distribute the Christmas boxes to families around Old Town, Alton and Bradley.

Each box will supply non-perishable food items to a family who needs it. “It makes my heart happy,” Bryant said. “I have a great rotary family that supports whatever I come up with.

“They just want to help people,” she said.

Bryant, who said she doesn’t hold any special position within the Old Town Rotary Club, emphasized that the program’s success is largely due to collaborations with the community and her fellow rotarians who want to give back.

“There’s a lot of good people in the world, Bryant said. “These families, they’re doing the best that they can … if we can do just this little bit to help, then it’s worth it.”